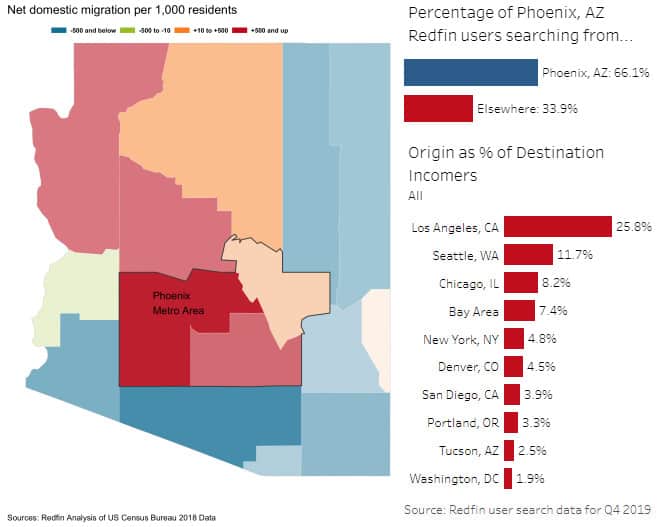 Since 2016 nearly 300,000 new voters have entered Arizona—the majority are Democrats

Across the country, Americans are migrating away from traditionally blue states and into ones more commonly red. This is most obvious perhaps in Arizona, one of the fastest growing states in the country, where that growth is being driven by an influx of residents from other states, according to the Census Bureau. It ranks third in both the number and share of net new residents coming from other states. Arizona’s most populous county—Maricopa County—has also topped the list of fastest growing counties in the nation for several years. But what does all this migration into the state mean for the political makeup of the Grand Canyon State?

Are all these people moving to Arizona Democrats or Republicans? On the one hand, 1 in 4 new residents are coming from California—one of the bluest states in America. Our own data on migration (see chart above) shows that nearly every city sending families to Phoenix is further left on the political spectrum than Maricopa County, AZ (Phoenix), which voted a slight majority for Trump (47.7% vs 44.8% for Hillary Clinton). Many people moving to Arizona may be leaving behind the problems commonplace in liberal urban centers such as Los Angeles—notably high cost of living and congestion. On the other hand, if there’s a sense that such migrants are liberals, there is ample evidence of political self-sorting —that the people most likely to move to more conservative areas are also more conservative than the places they left behind. There are even companies helping households move and sort into conservative areas.

To help understand how, and if, migrants might be changing the political landscape or simply migrating toward places that reflect their political values, we recently dug into voter registration data by county offered publicly by the state of Arizona. 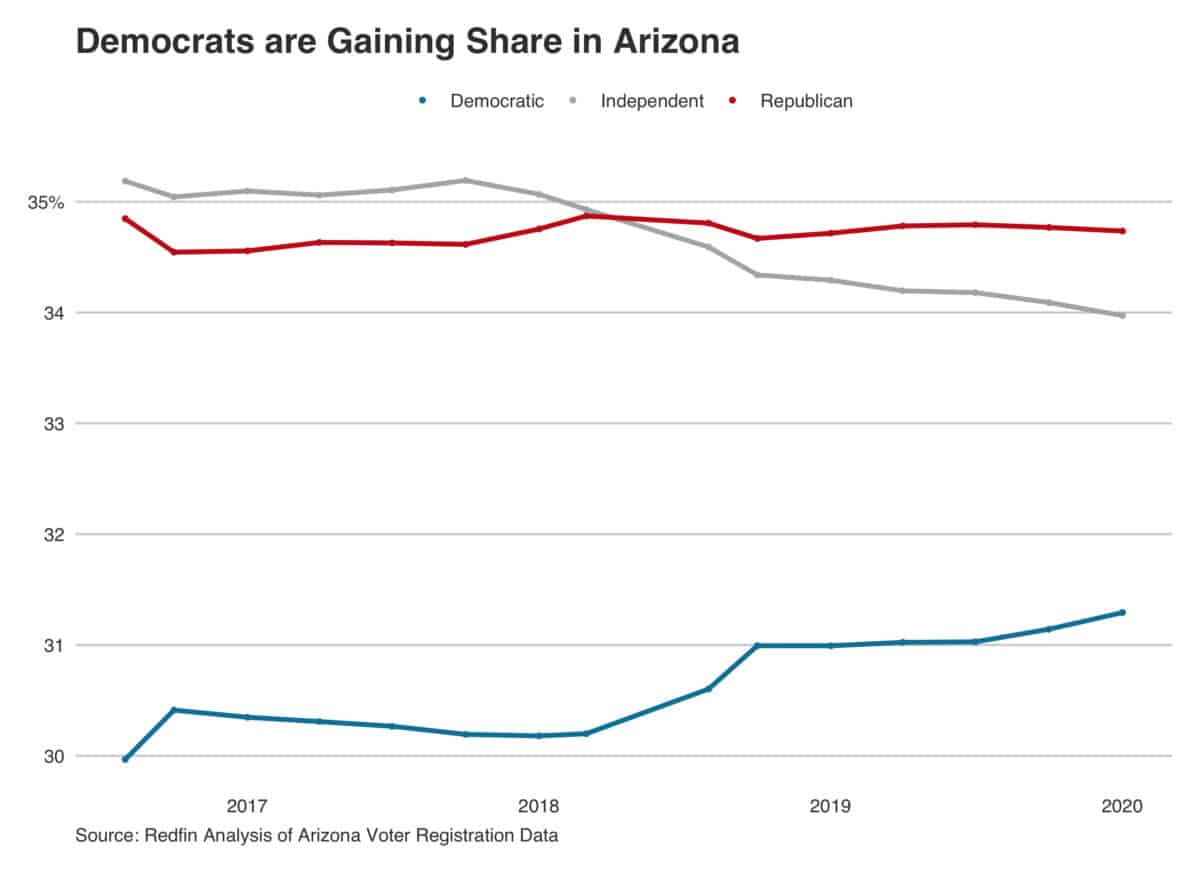 Registration Data Could Be A Proxy for Election Results

But how reliable is this data anyway? Voter registration data in Arizona is released every few months and breaks out the total number of actively registered citizens by political party and county. More than 60% of citizens are actively registered to vote and fully 86% of those registered turnout to vote—the fourth highest of any state. Voter registration data would even have accurately predicted nearly every Arizona county’s political preferences in 2016, making it a great proxy for actual election results, especially compared to other states. 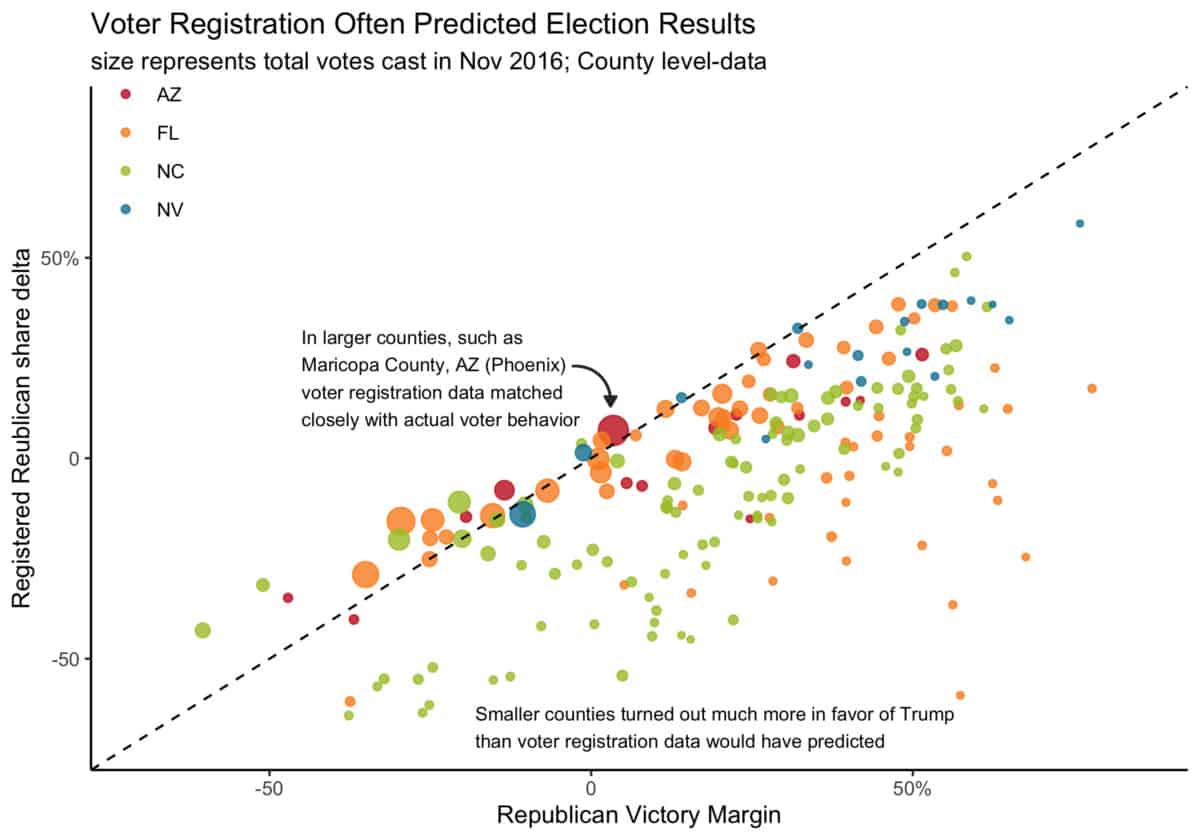 Some things in Arizona have changed significantly since 2016, however. While it remains far cheaper to buy a home in the state than in nearby California, home prices have been rising substantially. The typical home in the Phoenix metro area sells for nearly $300,000—37% more than it did just four years ago. Even so, low taxes serve to offset the rising prices, and Phoenix has been building a lot of housing to accommodate the influx of residents. In the fourth quarter of 2019, builders in Phoenix filed permits for 19.1 units per 10,000 residents, which is more than triple that of the Los Angeles region at 5.3 units, according to the Census Bureau.

If You Build It They Will Come

Regions that are building the most housing are also the ones attracting the most residents. It just so happens that the states that make it easier to build by reducing red tape and relaxing zoning restrictions are typically red and are also the ones attracting residents from blue states on both coasts. The states in the Southwest are drawing residents from the West Coast, while residents in the Northeast are largely going south towards North Carolina, Tennessee, and Florida, according to Census data . The hope is, if nothing else, this kind of blue to red migration might make our country less polarized.