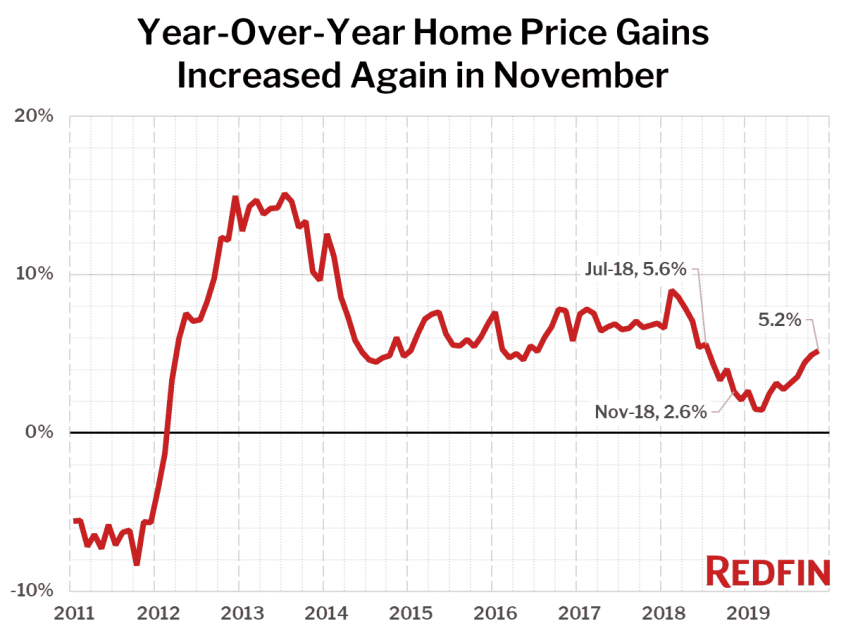 U.S. home-sale prices increased 5.2% year over year in November to a median of $311,600 across the 217 metros Redfin tracks. The increase was the largest since July 2018, when home prices were up 5.6% from a year earlier. Home prices were flat between October and November, which is a bit weak compared to the average 0.7% increase between those months over the past seven years.

“Given that inventory is falling quickly, we’d expect to see even stronger price growth, especially when compared to last year’s soft market,” said Redfin chief economist Daryl Fairweather . “The fact that homes are selling faster indicates that there are buyers ready to pull the trigger and take advantage of low interest rates. If lack of inventory and high demand continues, buyers who take a wait-and-see approach could face less favorable conditions in the spring season like bidding wars and faster price growth.”

For the second month in a row, just one of the 85 largest metro areas Redfin tracks saw a year-over-year decline in the median sale price in November: San Jose , where home prices fell 1.1%. In San Jose, prices were still just barely rising a year ago, up 1.6%. 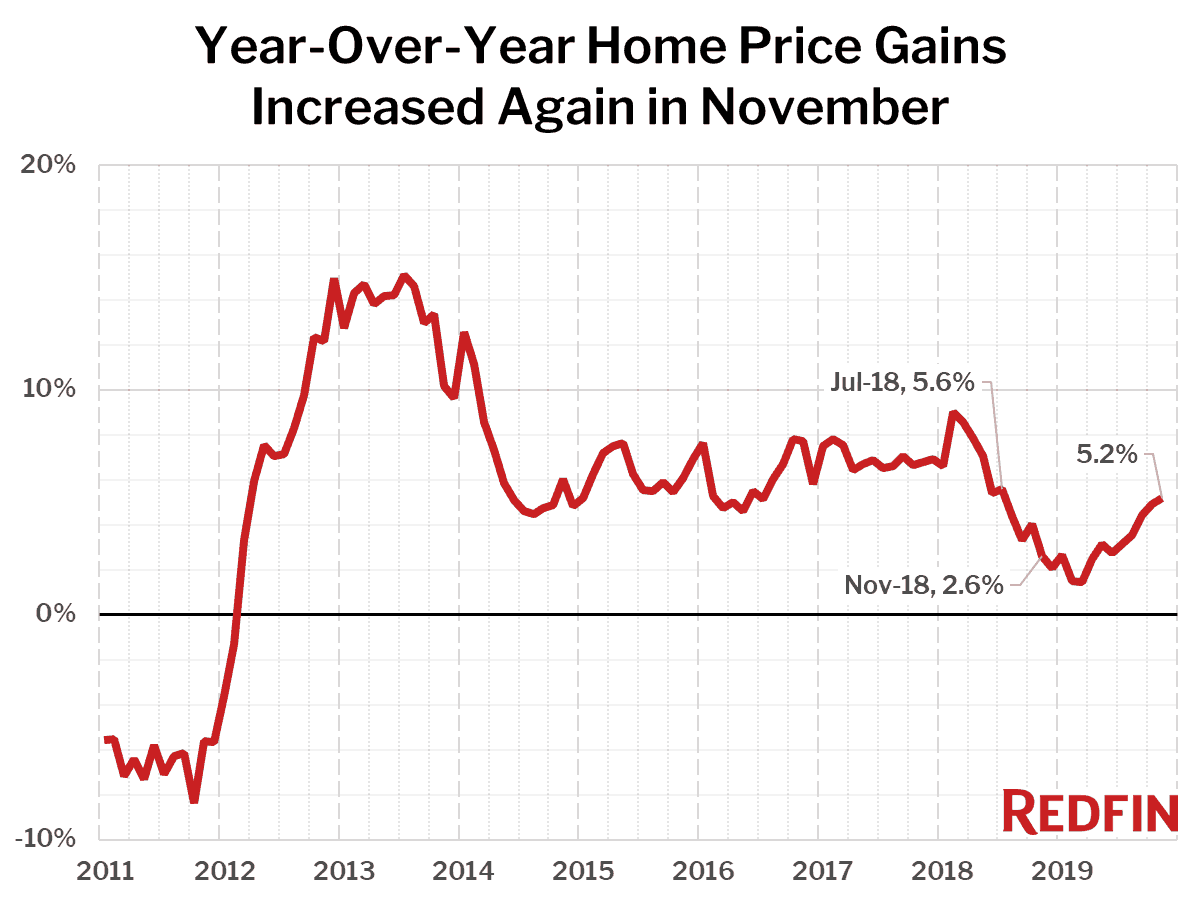 Nationwide, home sales increased 3.0% year over year in November, the fourth consecutive month of increases, and were down 0.3% from October on a seasonally-adjusted basis. 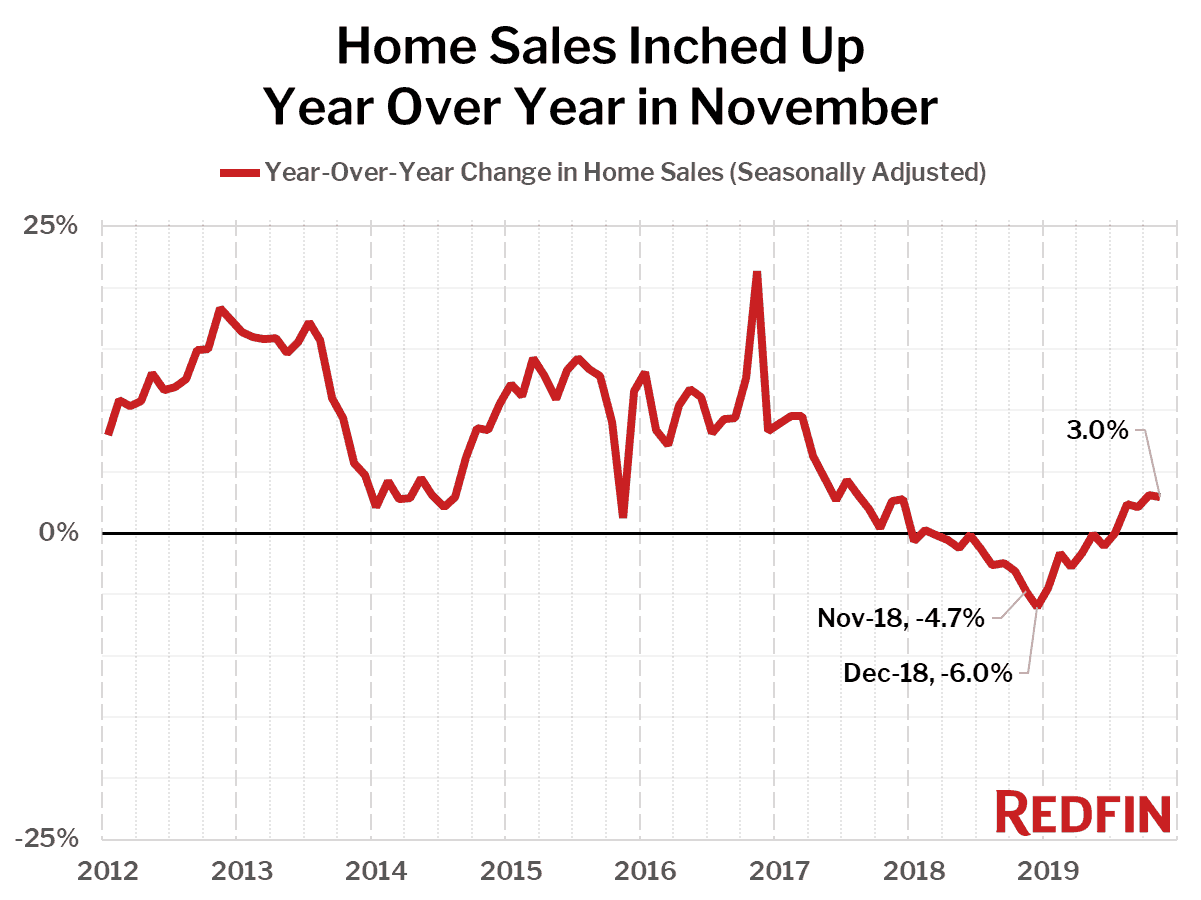 The supply of homes for sale fell 12.1% year over year, the biggest decline since April 2013 and the fifth straight month of declines. There were fewer homes for sale last month than in any November since at least 2012 (as far back as our current dataset goes). Just six of the 85 largest metros tracked by Redfin posted a year-over-year increase in inventory, led by Knoxville (+12.0%), El Paso (+5.2%) and Honolulu (+2.6%). 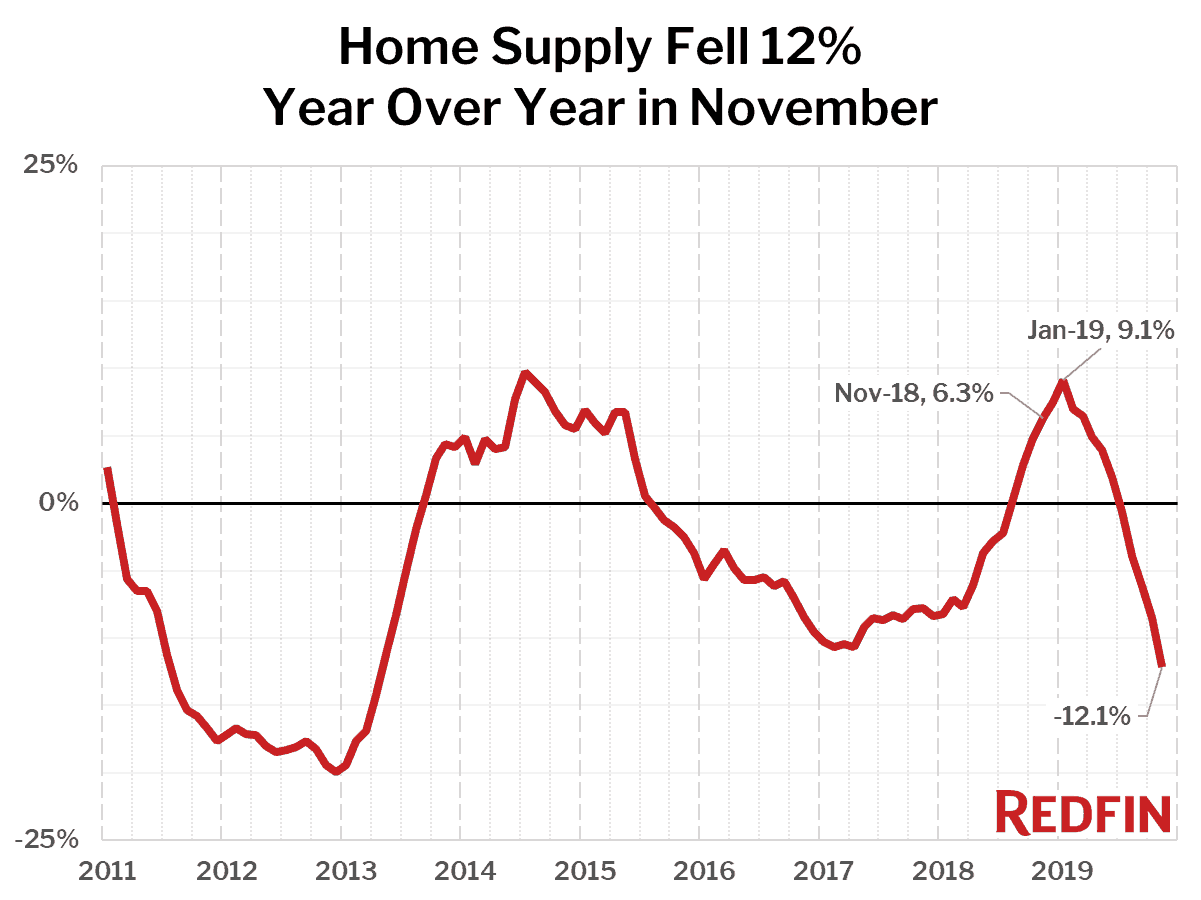 The share of homes sold above list price increased year over year, coming in at 20.7% in November compared to 19.9% a year earlier. 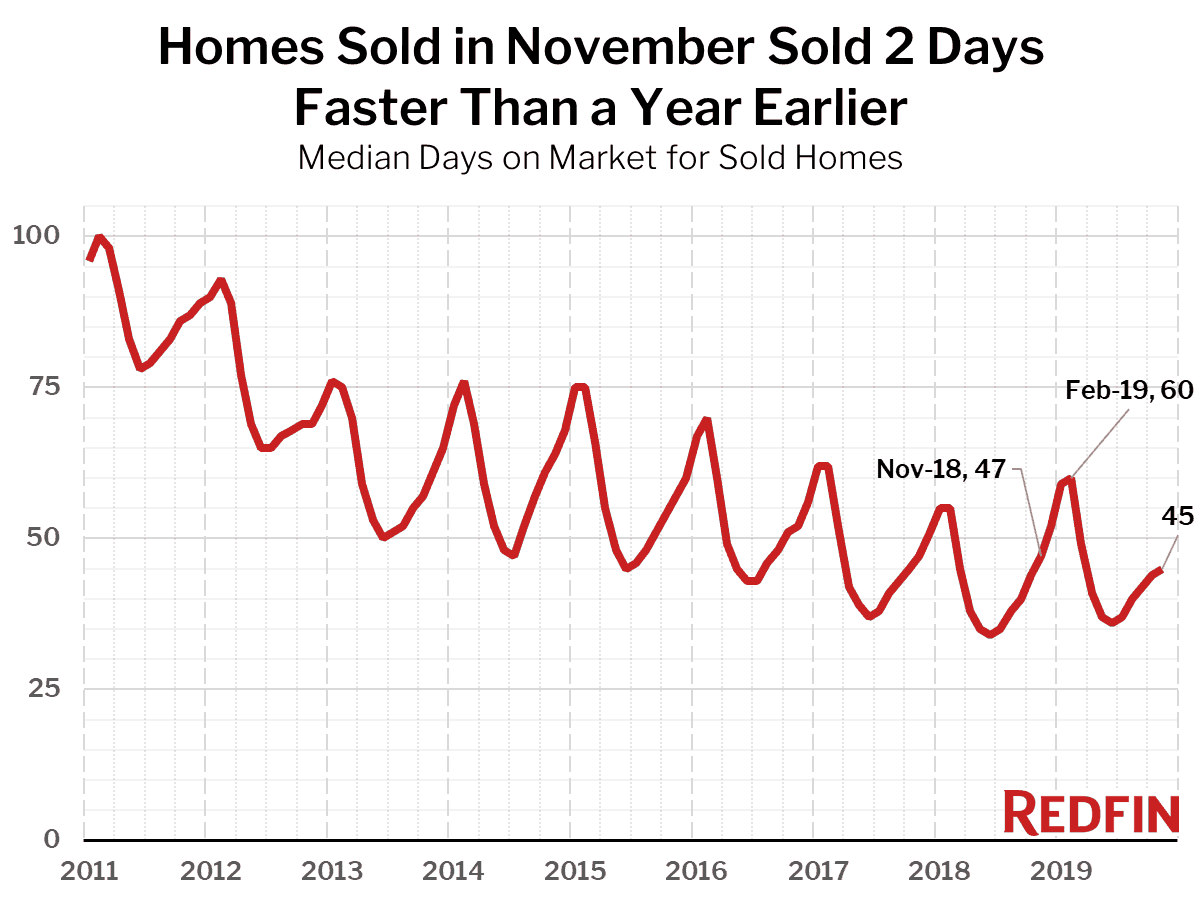 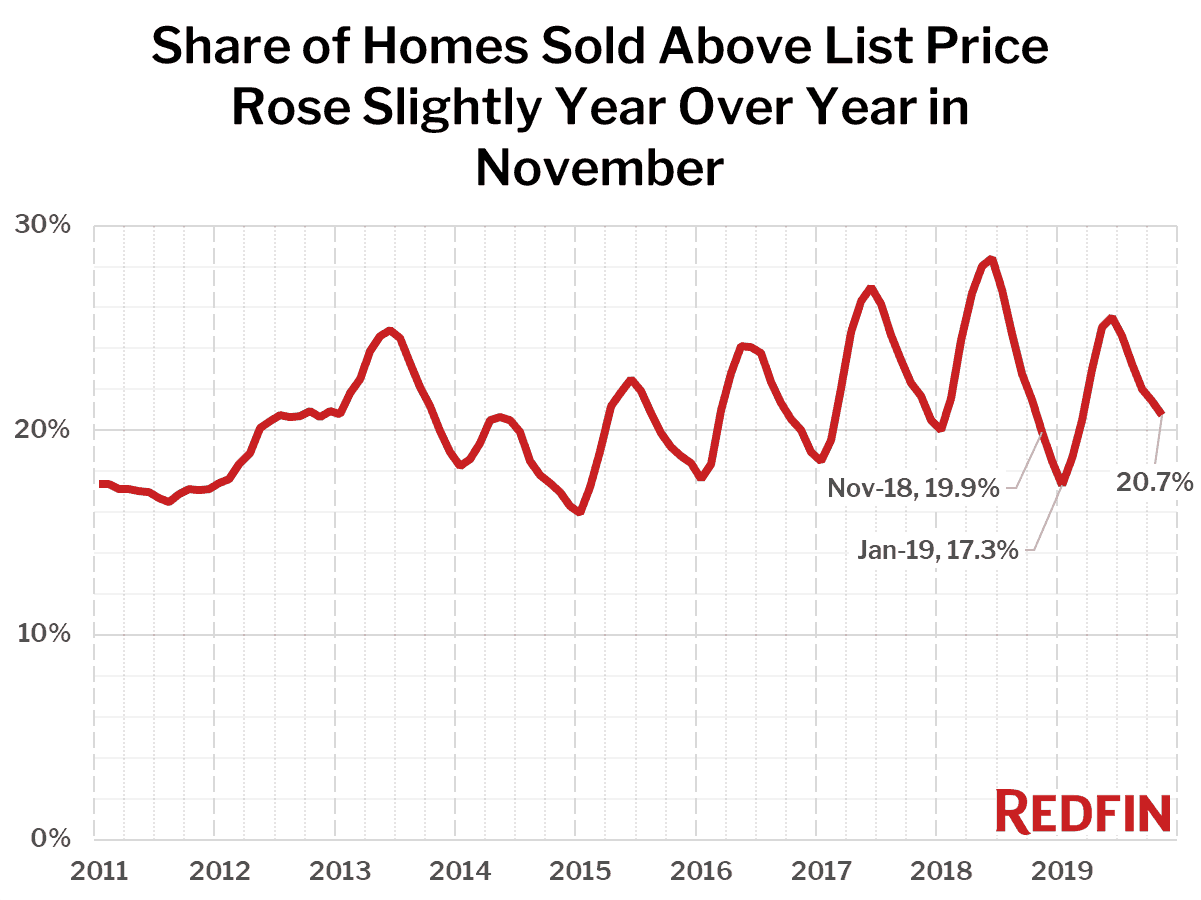 The post Home Prices Increased 5% in November Amid Rapid Decline in Number of Homes For Sale appeared first on Redfin Blog .