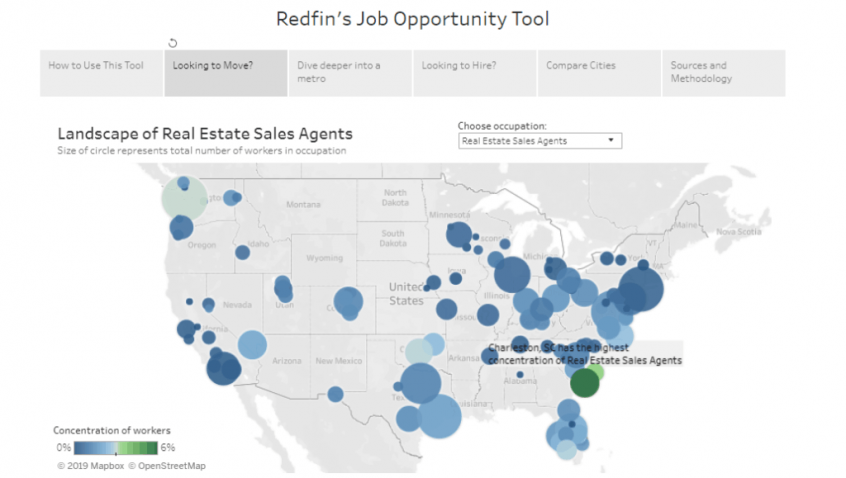 Today we are launching the Redfin Job Opportunity Tool as part of the latest sprint for the U.S. Census Bureau’s Opportunity Project . This tool was designed to help the millions of Americans looking to relocate each year, as well as businesses deciding where to open offices. Using detailed data from the Bureau of Labor Statistics on wages by occupation as well as local housing, urban and employment data, this tool helps people understand the opportunities and tradeoffs when deciding where to live or find talent.

Who this tool was designed for

Deciding where to move is one of the most important choices a household makes in their lifetime, yet weighing the pros and cons is challenging. One consequence of this hurdle is the rate at which Americans move to places of better opportunity—such as those with higher paying jobs—has fallen to the lowest rate on record, according to the latest Census data . This tool helps movers weigh opportunities through examining the jobs landscape and living costs nationwide.

This tool also helps employers and entrepreneurs make decisions about where to seek talent through examining a region’s job growth across industries. In contrast, the transparency into salaries across the country helps employers retain talent by adjusting pay to remain competitive.

Cost of living and pay are some of the most important data points for researchers to compare areas across the country or neighborhoods within a metro area. This tool makes data more accessible for comparison, and it allows users to download at the metro (CBSA) level and census tract.

How to use the Job Opportunity Tool

The first “Looking to Move?” feature compares cities and jobs across the country. It can be advantageous to work alongside others in the same profession, so finding a place with a high concentration of workers supports career growth. Relocating to these areas often leads to better pay, more chances to collaborate and network with other workers, and ultimately, better employment options. However, not everyone should cluster in one place, as there are other tradeoffs to consider. The most important is cost of living. The extra pay sometimes makes up for the higher cost of housing, but people often overlook other costs such as utilities, taxes, or transportation. All of these factors paint the full picture of affordability. 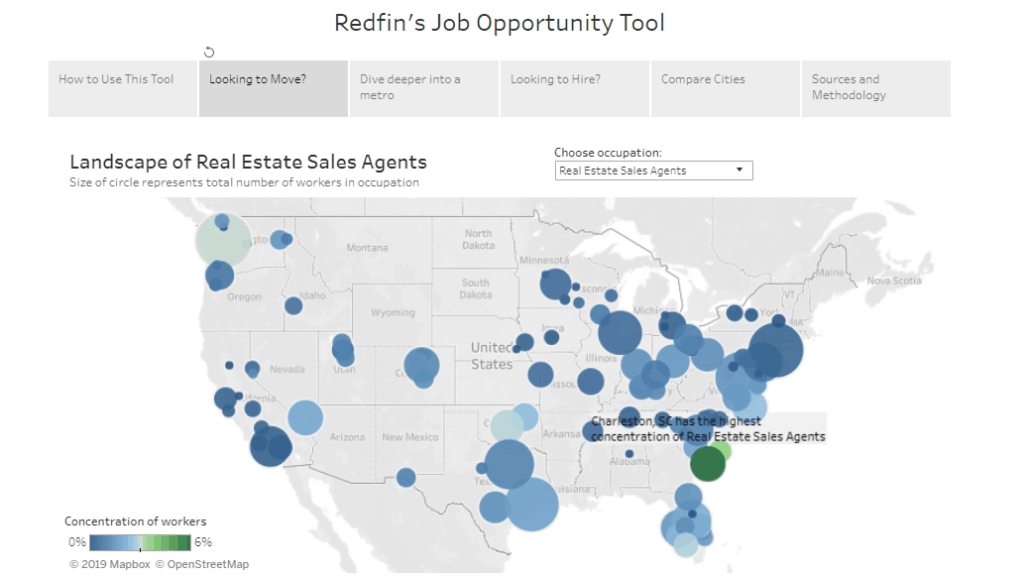 The deeper dive feature helps someone look at data across a metro. Once they know which city they want to work in, factors such as housing costs, access to transit, and the number of accessible jobs become important to consider. Here, there is the ability to drill down within a metropolitan area to see how different neighborhoods compare on key data points such as total cost of housing and pay ranges.

The “Looking to Hire?” feature is helpful for employers to consider where to open up a new business, a second office, or evaluate how competitive their pay is for employees. Businesses can work to retain talent by showing them how their pay compares to similar jobs in other cities. These findings benefit employers who didn’t previously have a way to determine appropriate salaries for workers in their respective cities, as cost of living influences how far a paycheck will stretch.

Finally, the city comparison feature gives a birds-eye view of how cities compare on key measures including new housing construction, walkability and net migration. Examining which cities are poised for growth or plagued with challenges can be illuminating for researchers, policy makers and businesses looking to expand in new markets.

Insights from the tool

Some items stand out right away:

How we built the tool

The research team at Redfin pulled together a wide variety of data to make this tool. We used data from the following sources at both the core-based statistical area (CBSA) and the census tract level:

Our previous project in collaboration with the team at the Census was the Opportunity Score . This identifies housing with access to good jobs that have a 30-minute carless commute.