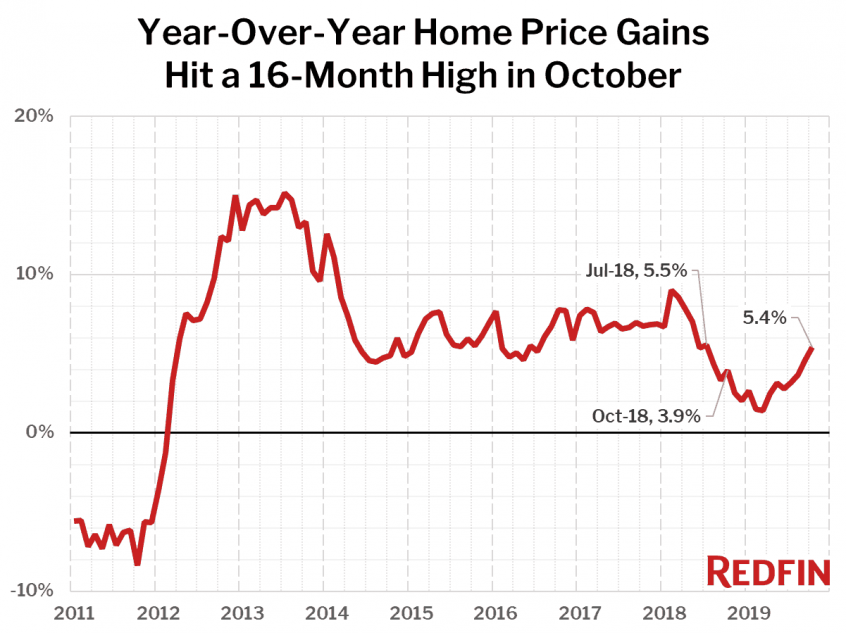 U.S. home-sale prices increased 5.4% year over year in October to a median of $313,200 across the 217 metros Redfin tracks. The increase was the largest since July 2018, although current strength may be overstated given the weakening housing market a year ago. Prices also rose 1.4% between September and October, a time of year when they usually flatten. This is the largest month-over-month increase in an October we’ve seen since at least 2012.

“Low mortgage rates are propping up homebuyer demand and juicing prices, said Redfin chief economist Daryl Fairweather . “However, home sales have been slow to grow since there are so few homes for sale and not many new listings hitting the market, especially affordable ones. The market is split: It’s a seller’s market for moderately priced homes, but a buyer’s market for pricier homes.”

In the Washington D.C. metro area, where Amazon announced its HQ2 expansion a year ago, the median home price rose 5.1% from October 2018 to $410,000—a larger year-over-year increase than San Francisco , Seattle , Los Angeles , Boston , New York and most other expensive metro areas across the nation.

Just one of the 85 largest metro areas Redfin tracks saw a year-over-year decline in the median sale price: San Jose , where home prices fell 7.2%. In San Jose, prices were still rising 9.9% a year ago, and home prices didn’t begin to significantly soften until December. 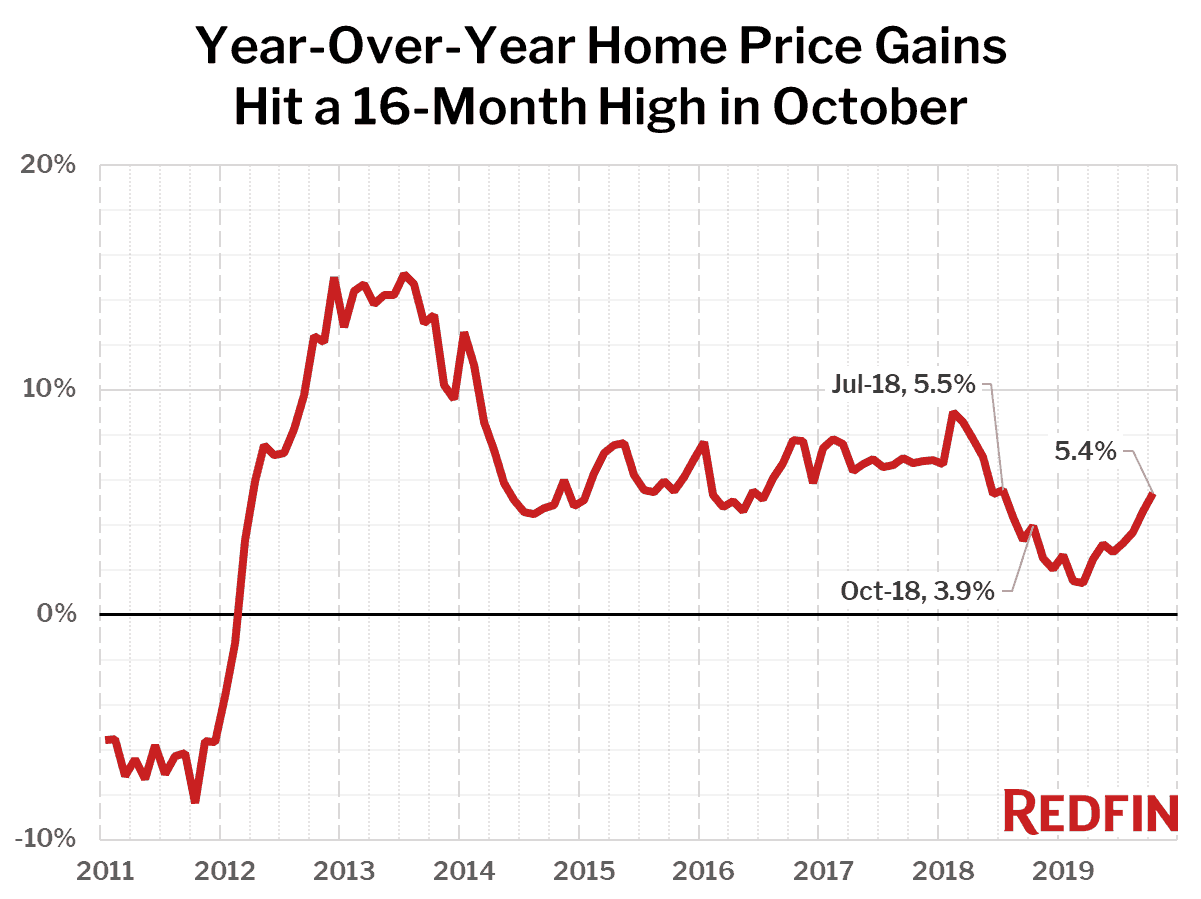 Home sales edged up 1.1% year over year in October, the third consecutive month of increases, and were down slightly from September on a seasonally-adjusted basis.

The seven markets with the biggest increases in home sales were all metro areas in the south with median home prices below the national median, led by Virginia Beach, VA (+19.6%), Greensboro, NC (+17.3%) and Greenville, SC (+16.3%). 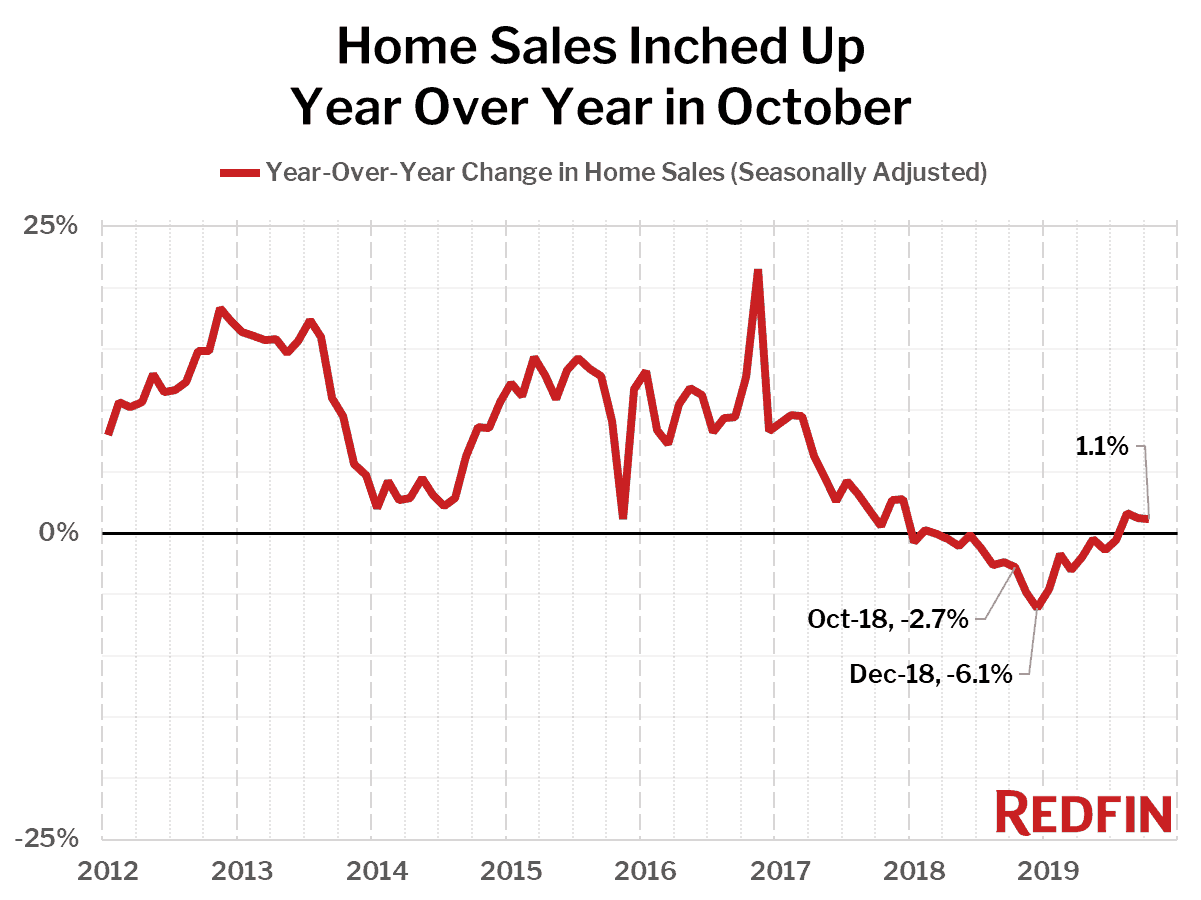 The supply of homes for sale fell 9.1% year over year, the biggest decline since April 2017 and the fourth month in a row of declines. There were fewer homes for sale last month than in any October since 2013. Just 12 of the 85 largest metros tracked by Redfin posted a year-over-year increase in inventory. 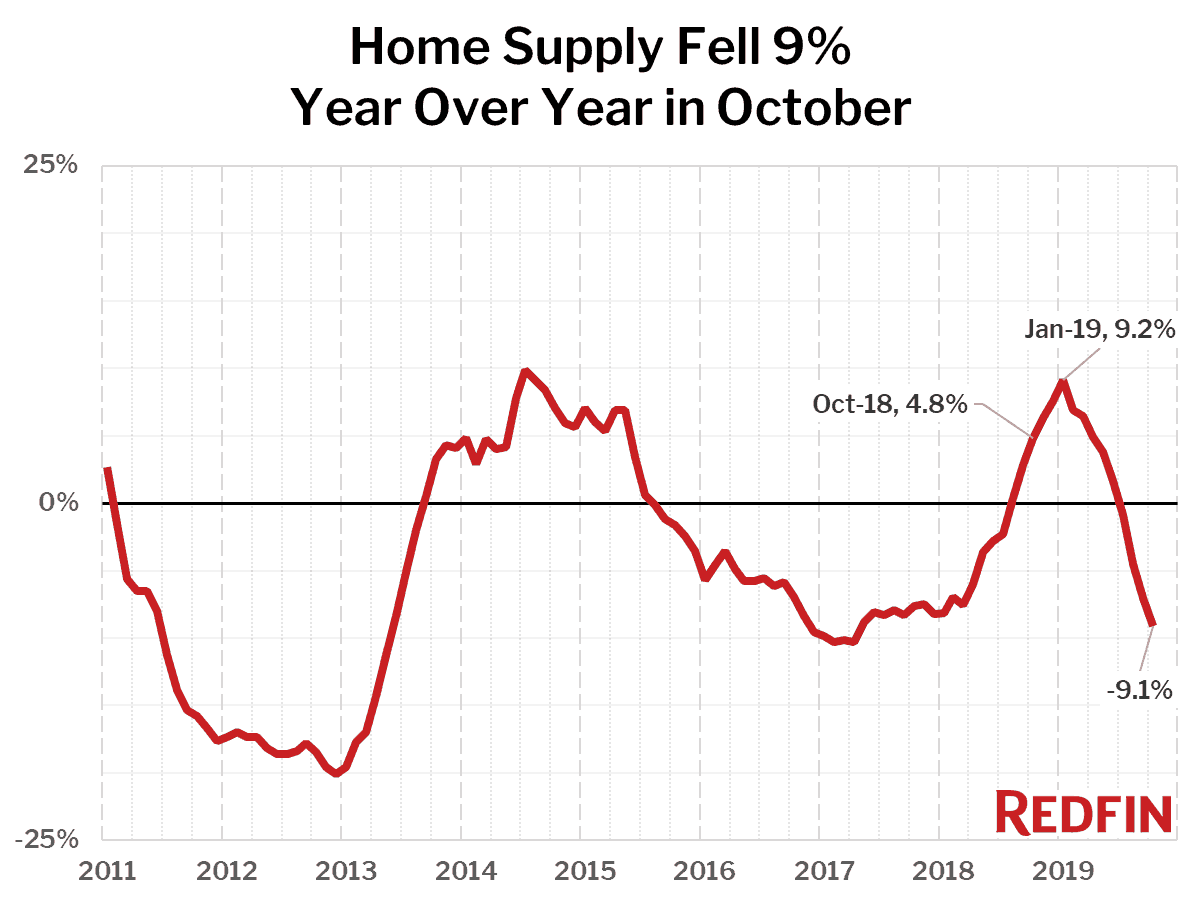 Home prices usually rise in response to either an increase in demand (home sales) or a decrease in supply (homes for sale). When demand increases and supply decreases, prices usually rise rapidly, as we saw in 2013. October did not see much of an increase in home sales, but it did see a drop in the number of people listing their homes for sale and a drop in overall supply, so it’s likely that the strengthening prices were the result of fewer homes for sale instead.

Homes are no longer spending more time on the market before they sell compared to a year earlier. The typical home that sold in October went under contract in 44 days, the same as a year ago.

Similarly, the share of homes sold above list price basically flattened out year over year, coming in at 21.3% in October compared to 21.5% a year earlier. 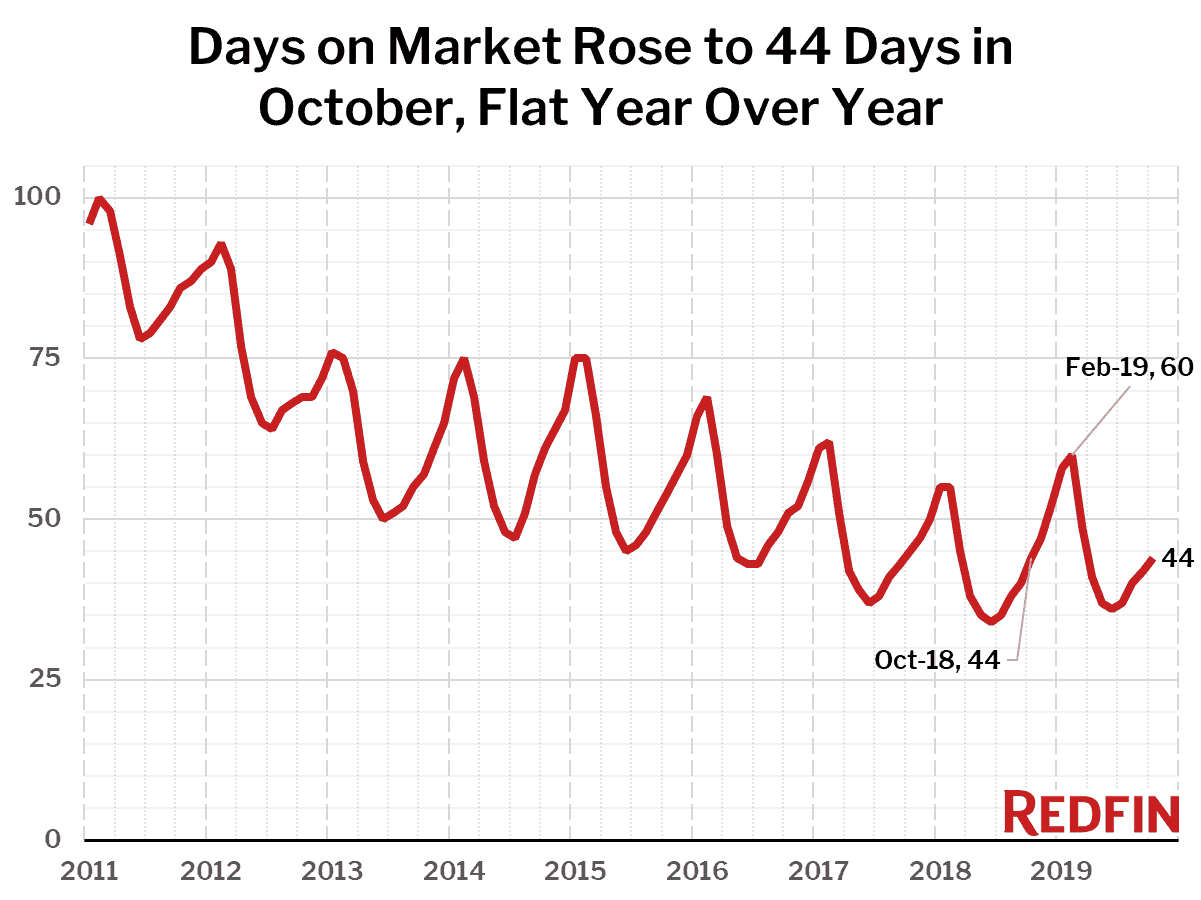 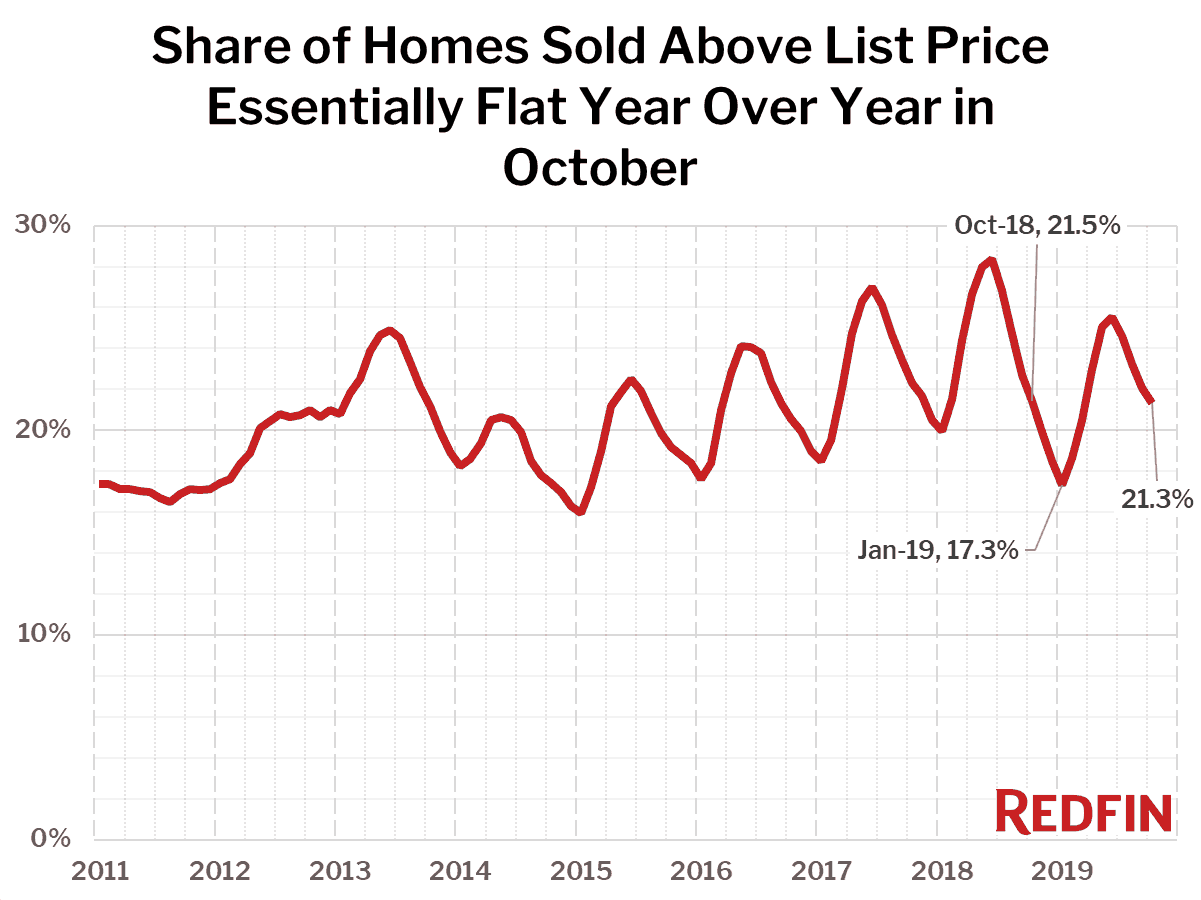 The post U.S. Home Prices up 5.4% in October appeared first on Redfin Blog .