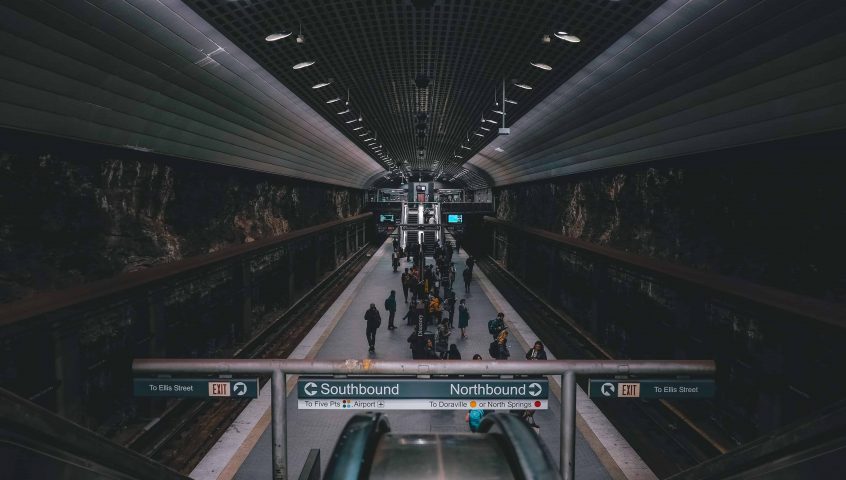 Racial diversity in neighborhoods with train stations remained high even decades after rail transit came to Atlanta and Los Angeles. 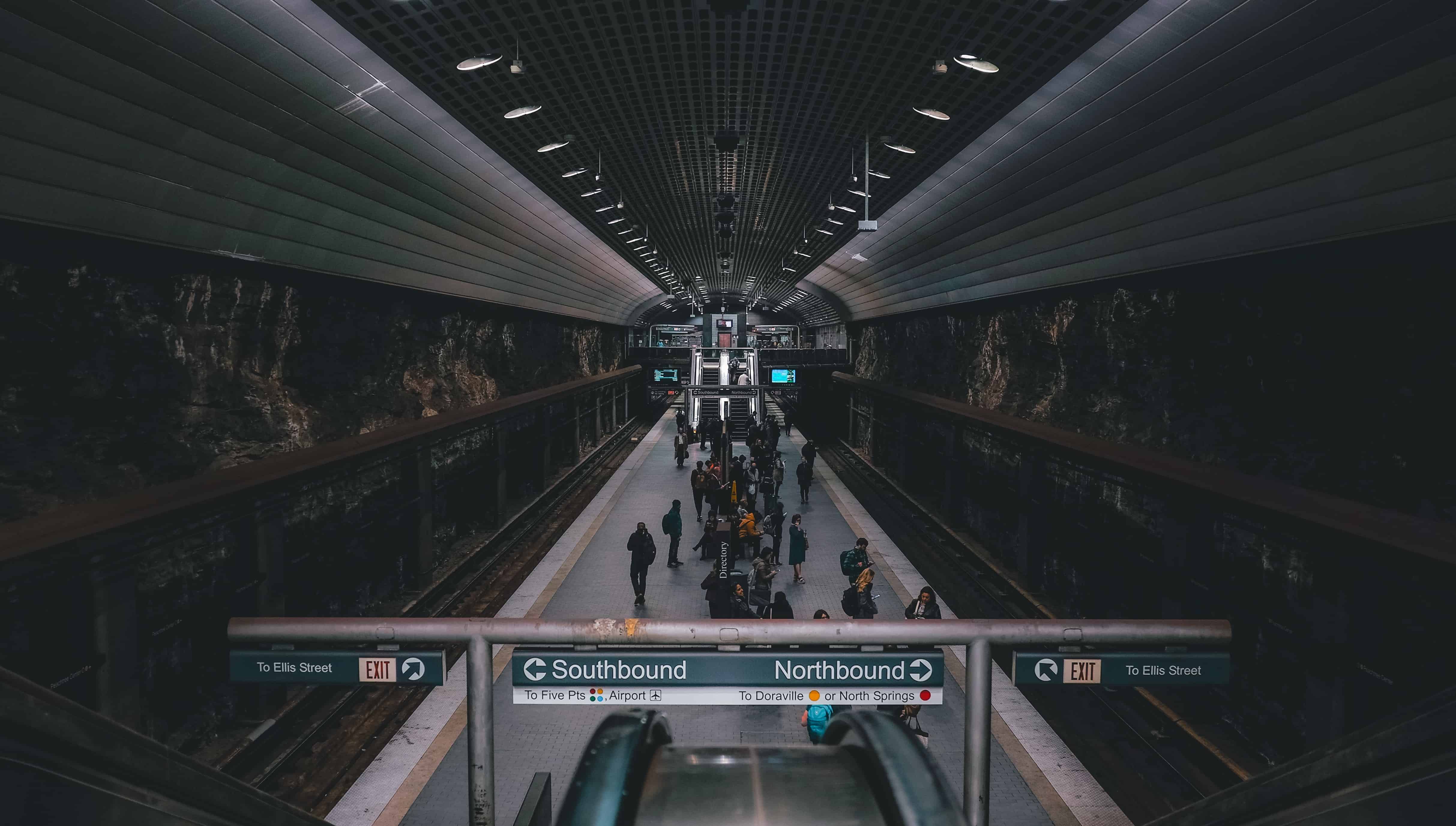 Improving transit access to a neighborhood does not lead to a significant decrease in minority populations, even as incomes and rents rise faster than similar neighborhoods without convenient transit. When a new rail transit stop is opened, long-term economic gains follow without a significant decrease in minority populations that is sometimes associated with gentrification. These findings are based on a Redfin analysis of 52 neighborhoods that contain 77 transit stations in three major metro areas (some neighborhoods had more than one station).

Between 1980 and 2017 in Atlanta neighborhoods that gained transit access:

We found similar results in Los Angeles and Seattle.

“Public transportation is more than just moving people from point A to point B—it can be a powerful economic force,” said Redfin chief economist Daryl Fairweather . “Improving job access through convenient transit is one way urban planners can help make life better for people across the socioeconomic spectrum. Policies that promote dense affordable housing could mitigate the increase in rents associated with improvements in public transit. The fact that minority residents weren’t displaced by white residents as the neighborhoods we studied improved post-transit is quite encouraging because it shows that big infrastructure investments can have a positive return in terms of reducing racial inequality.” 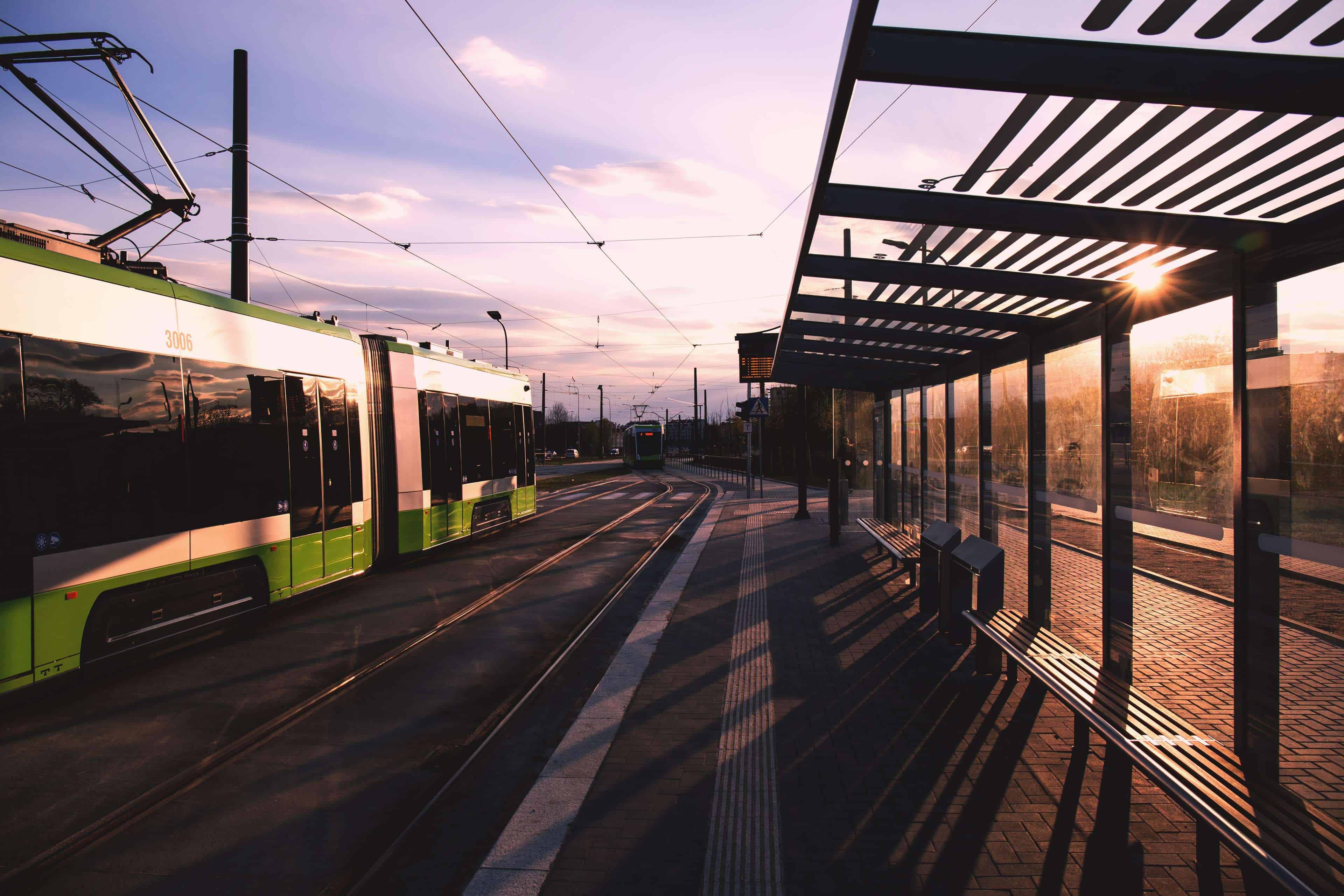 We also considered home value data from the Census but did not include it in this analysis since that data is based only on homeowner estimates and rent is a better indicator of costs for working-class families whose outcomes are most relevant to this analysis.

In Atlanta, 57 percent of the households in neighborhoods that received train stations in the first five years of MARTA service were non-white. That share increased to 69 percent in 1990 and 2000 and fell to 60 percent in 2010 and 2017, still above the baseline level when the stations first opened. The control neighborhoods saw a similar pattern, rising from 62 percent non-white in 1980 to 73 percent in 2000, then back down to 64 percent in 2017.

In Seattle, the share of non-white households has decreased slightly from 64 percent in 2010 to 62 percent in 2017. The control neighborhoods moved in the opposite direction, increasing from 62 percent non-white in 2000 to 65 percent in 2017. However, these changes were very small and this is also the metro area with the least amount of data available, so it is too early to say whether these movements represent the start of a trend or just a short-term aberration. 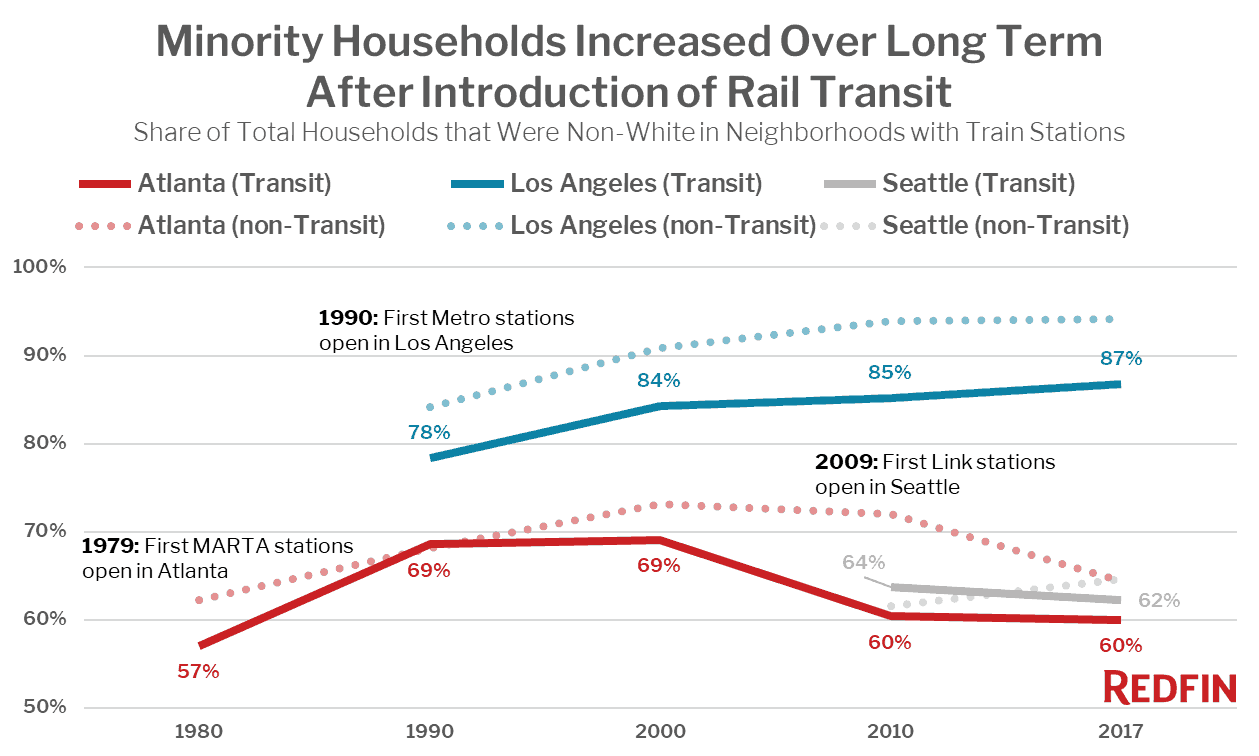 Minorities are not being edged out of neighborhoods in the wake of new rail transit, which is good since people who live near these new train stations are seeing their economic situation improve relative to similar neighborhoods in the same metro areas that lack trains. 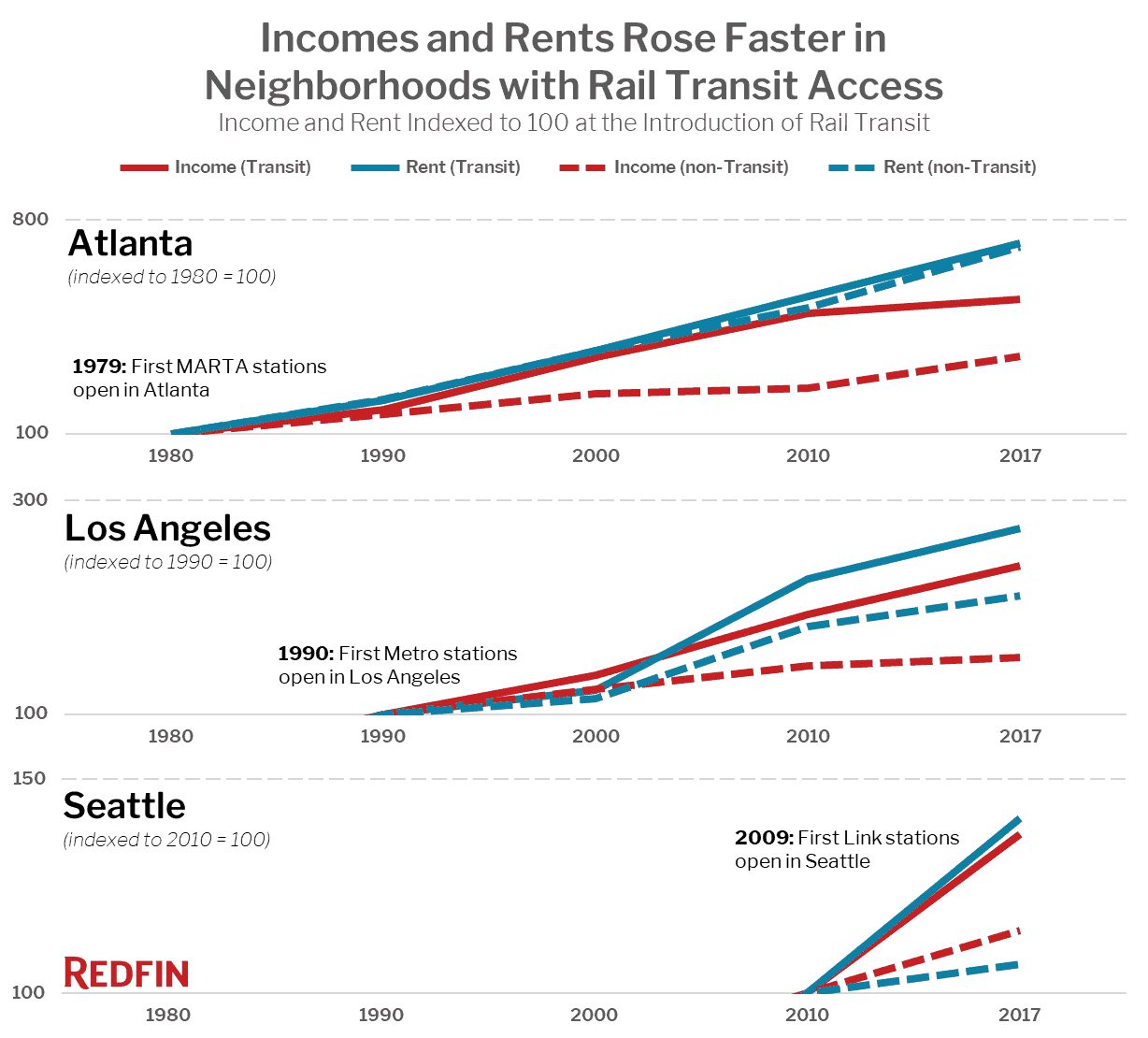 Residents in Neighborhoods with Rail Transit Access Kept More of Their Income Gains, Even After Rent Increases

When you look at annual rental costs as a percentage of annual income, you can see that in Atlanta and Los Angeles, the income gains in the transit neighborhoods kept closer pace with rent increases than what we saw in the non-transit neighborhoods.

One possible reason we have not yet seen an advantage for newly-transit-connected neighborhoods in Seattle is that the time since the train began running has been a period of extreme economic expansion in Seattle, and with incomes and rents rising rapidly across the whole metro area, the benefits of transit are muted. 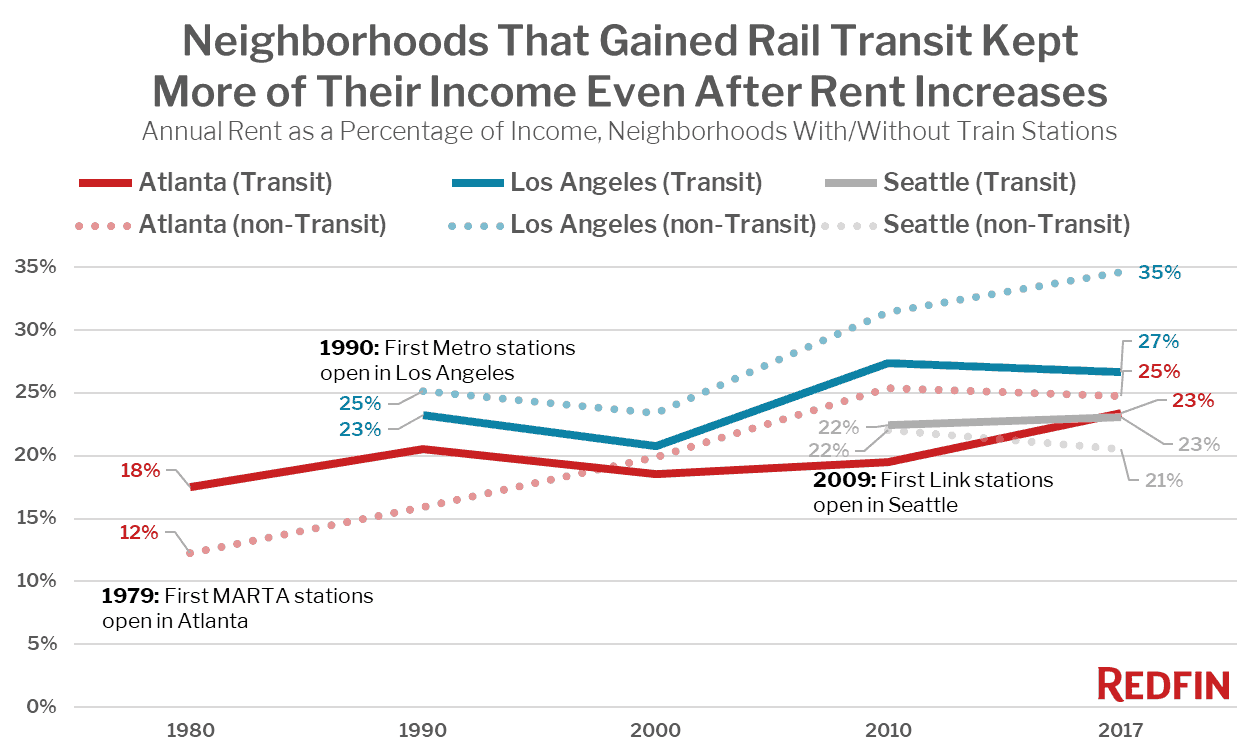 Income Gains May Come from New Migration into Transit-Connected Neighborhoods

Newcomers [to the Washington, D.C. metro area] have had a particularly strong effect on the demographic profiles of neighborhoods immediately surrounding rail stops. … In 2011-2013, 28.2 percent of all workers with rail access within the five-county area were recent movers, compared with 14.7 percent of workers for households without rail access.

Although it is likely that the access to high-paying jobs in the city center that comes with the addition of new transit is a boon to existing residents of a neighborhood, it is also clear that it attracts newcomers as well. Further research is needed to determine how the economic gains discussed above are distributed among existing residents versus newcomers.

Rail Transit Expansion is a Powerful Economic Weapon for Good

In general, the addition of transit seems to be a net positive for a neighborhood. Many of the neighborhoods that gained rail transit access were relatively diverse, and in the decades after the train stops opened there, they saw a stronger boost in incomes than other similar areas without transit, even while remaining diverse. This is likely due to increased access to high-paying jobs in metro job centers as well as in-migration of people who already hold these high-paying jobs.

However, as incomes rise more quickly in these areas rents also rise in kind. When residents see their incomes rise and newcomers with higher incomes move into the neighborhood, attracted by quality transit, housing costs increase in tandem with incomes. Even so, households in transit-connected neighborhoods are better off than those in similar neighborhoods without transit.

We can’t tell whether it is specifically long-time residents of an area that reap the benefit of economic expansion in these neighborhoods, but all things being equal, neighborhoods that gain transit access do see their economic trajectory changed for the better compared to similar areas without transit.

These effects are important to keep in mind as policy-makers make plans and budgets for transportation infrastructure. One way that depressed areas could see their economic fortunes improved is to connect them to the city core via rail. As existing rail systems are expanded and new systems built, it’s a good reason to be thoughtful about exactly where these benefits could do the most good. 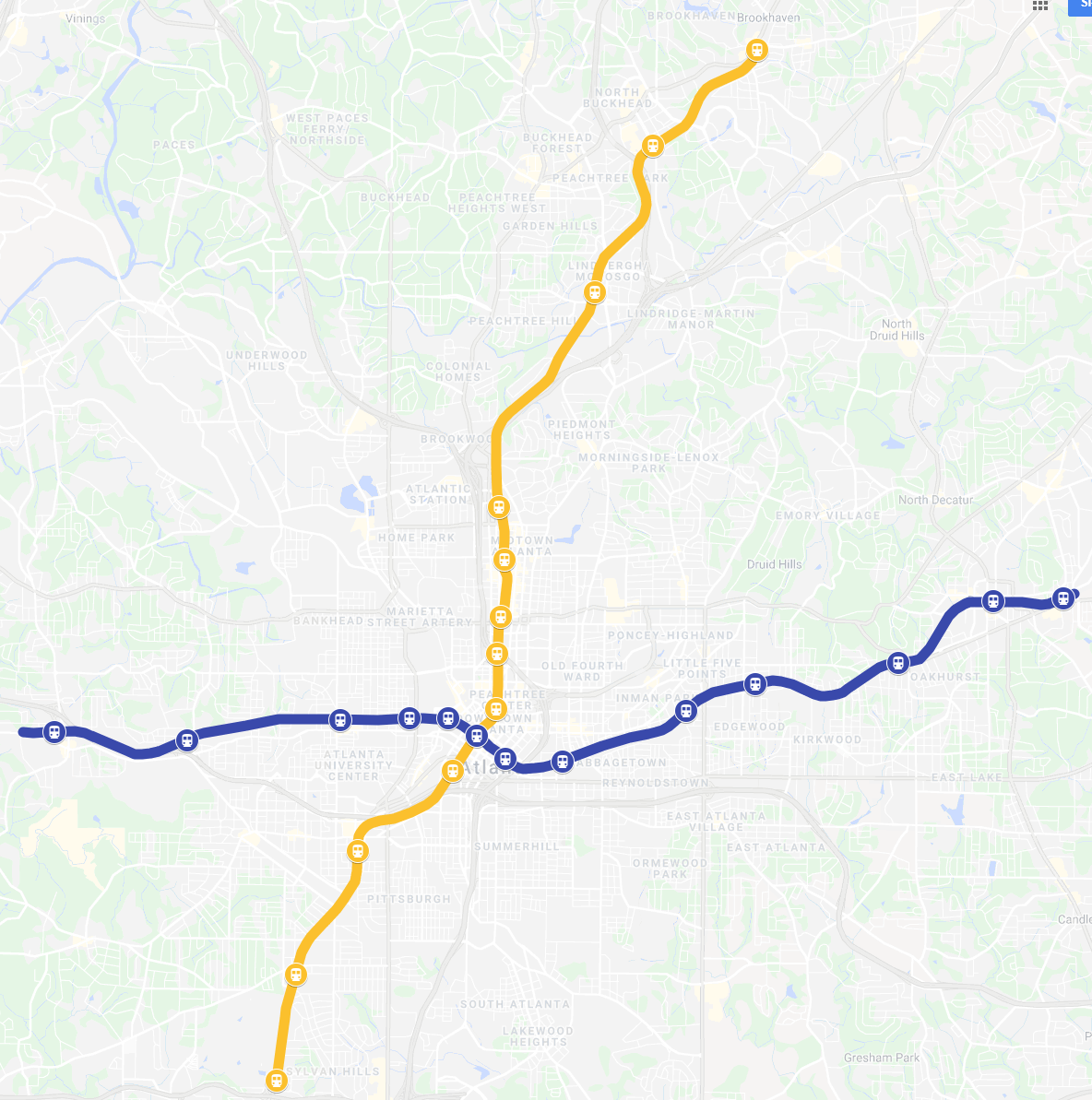 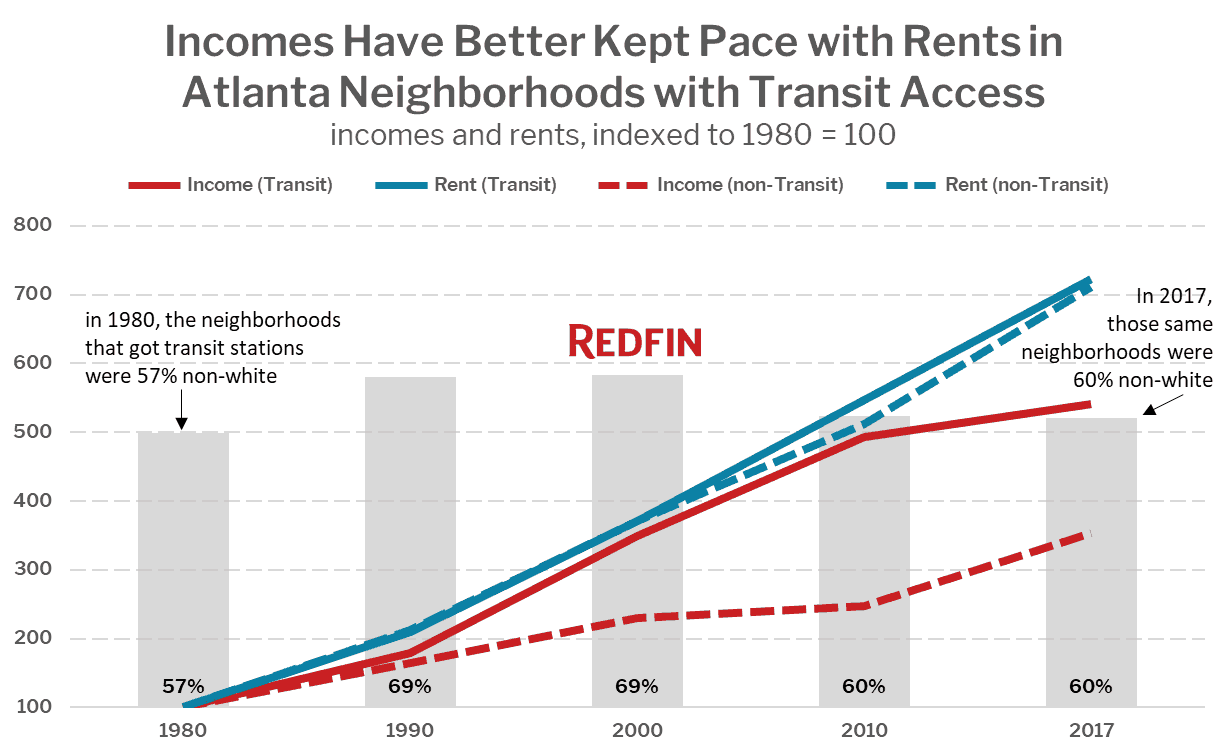 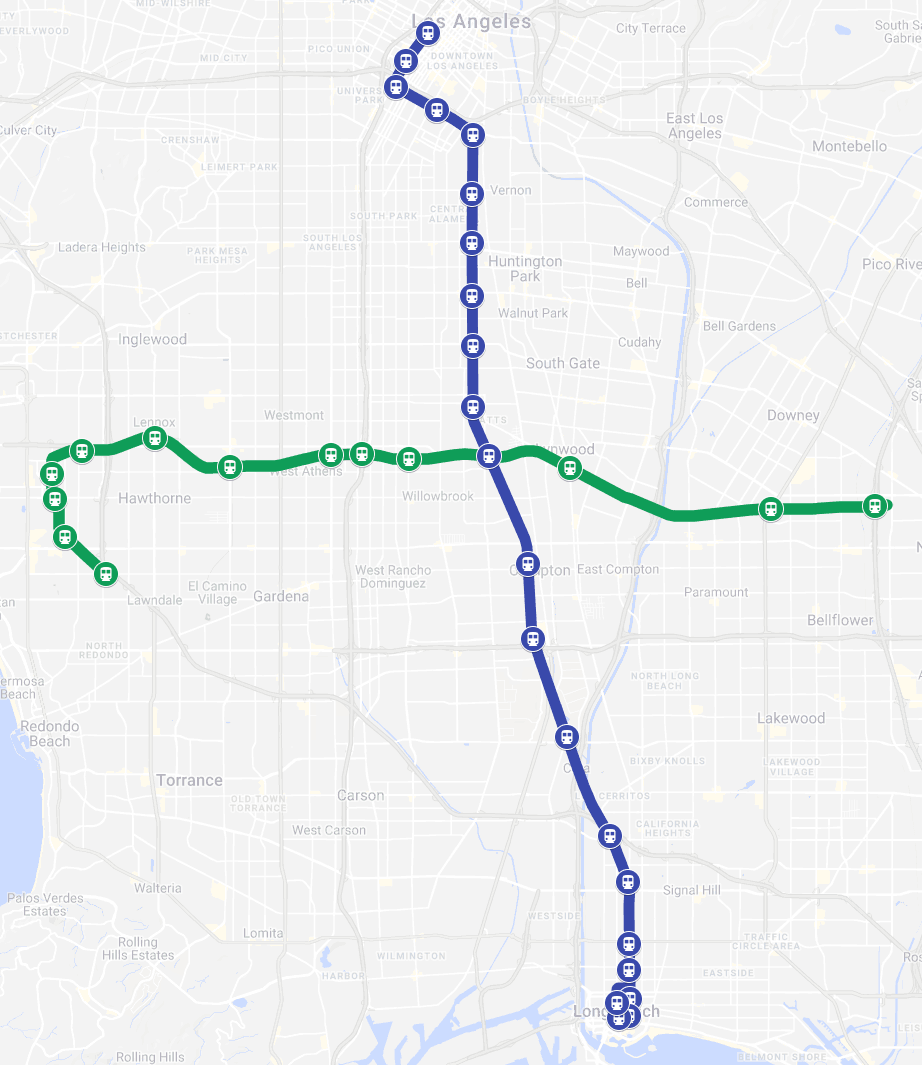 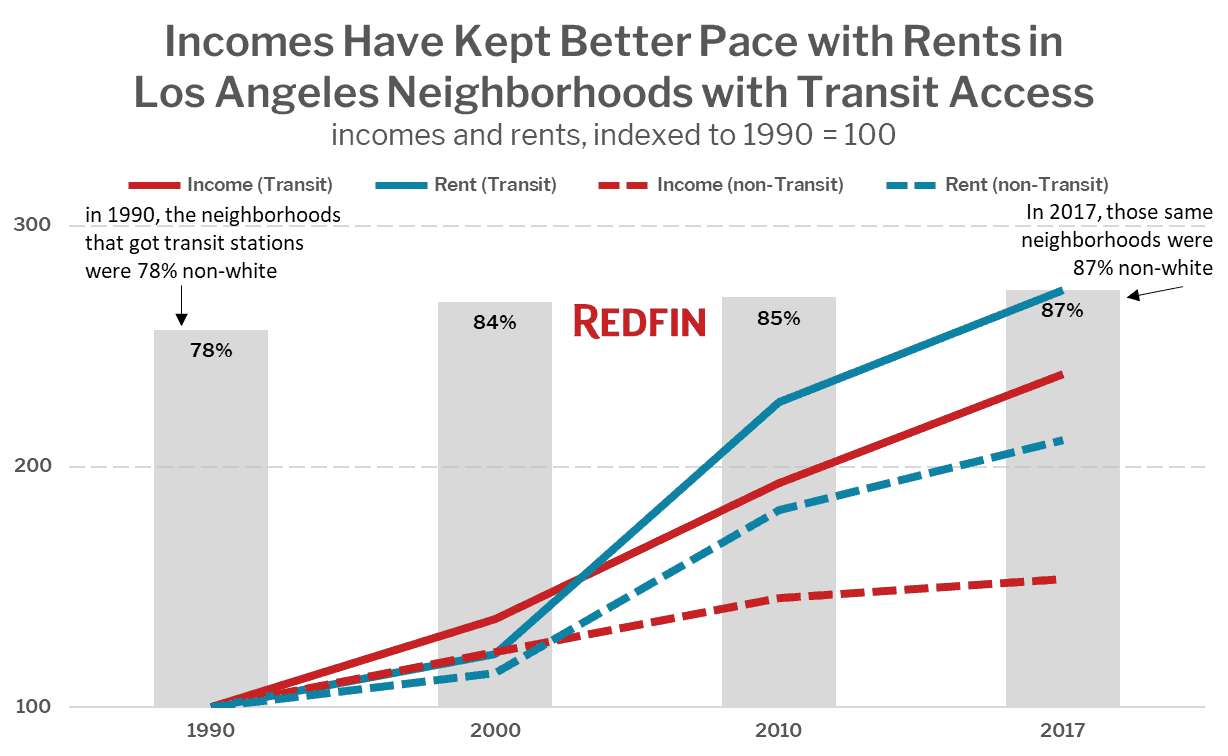 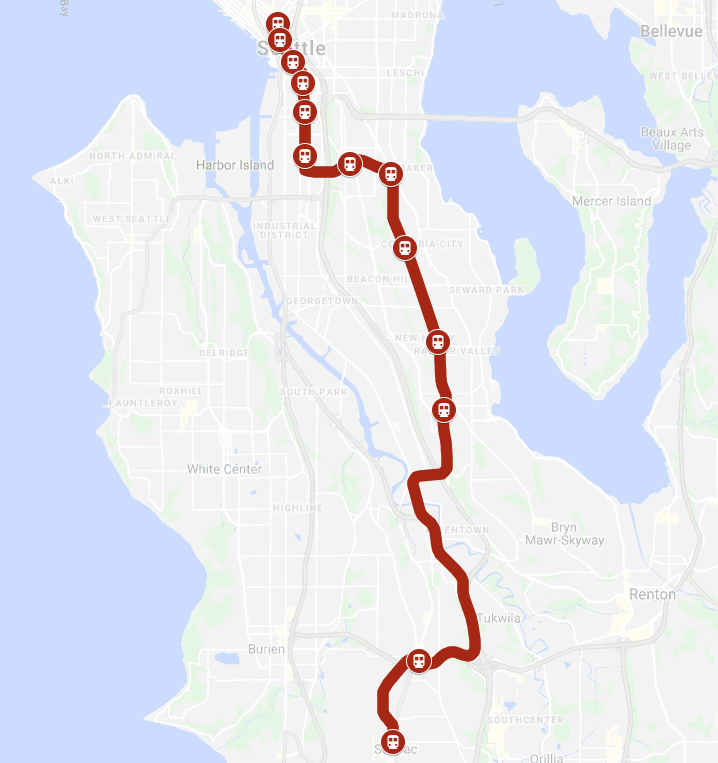 Seattle Income and Housing Statistics for Neighborhoods where Link Stations Opened in 2009, plus control group 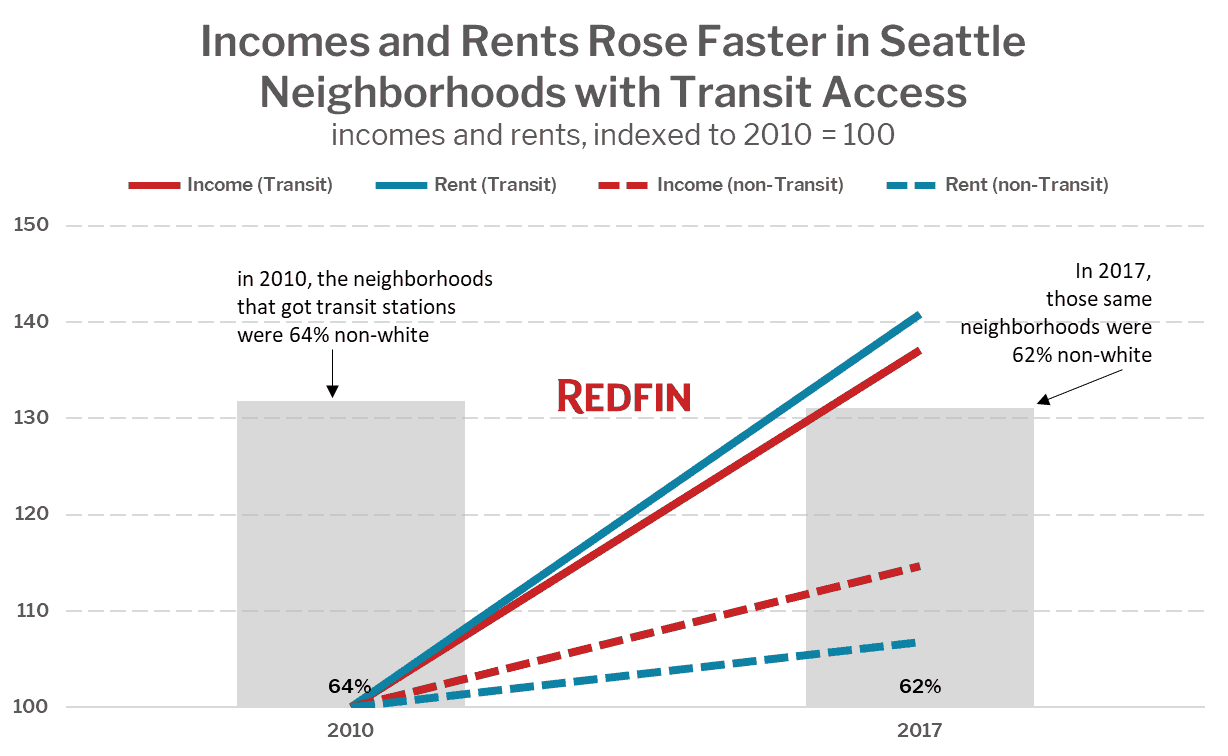 We collected the following Census data from the 1980, 1990, 2000, and 2010 Censuses as well as the 2017 American Community Survey data from the Census Bureau for each Census Tract that contained a transit stop that opened within the first five years of the transit line in each metro area, as well as a selection of Census Tracts in the same metro area with similar demographic characteristics at the time of the transit opening.