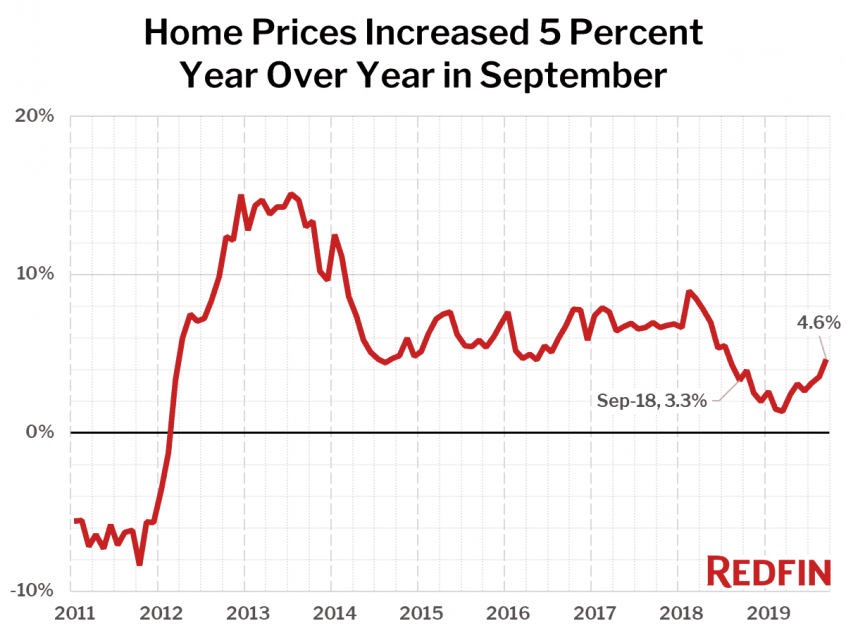 Home prices up 5% annually, the biggest increase in over a year.

U.S. home-sale prices increased 4.6 percent year over year in September to a median of $308,800 across the 217 metros Redfin tracks. This is the largest year-over-year increase since July 2018.

“The demand-driving effect of low mortgage rates is being cancelled out by jitters about the overall health of the economy and mounting affordability pressures in places where people are used to homes being relatively affordable,” said Redfin chief economist Daryl Fairweather . “Still, sales have been just strong enough in recent months to take a bite into the inventory that had been piling up earlier this year. While prices are rising, the market doesn’t feel ‘hot,’ but it’s likely to heat up in 2020 if the economy stays on course.” 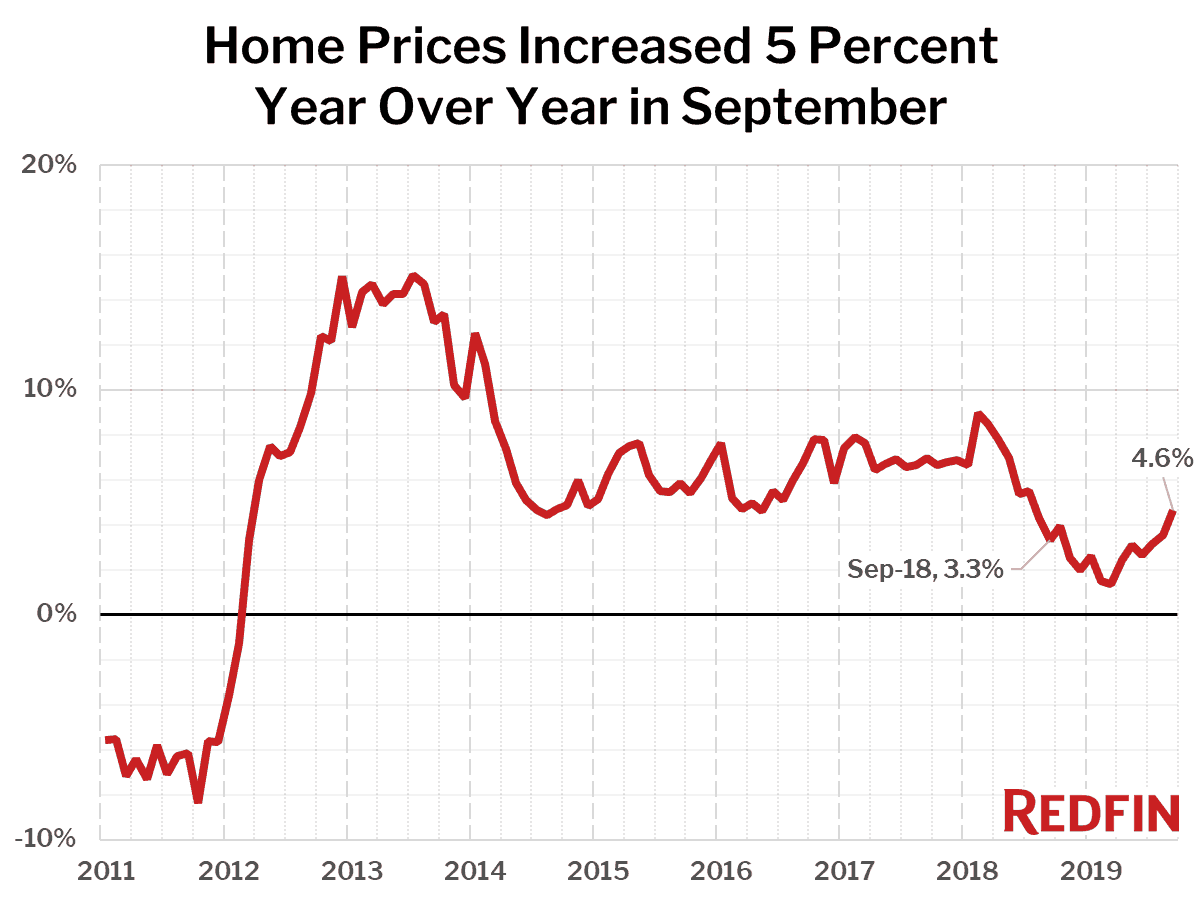 Home sales edged up 1.3 percent year over year in September, the second consecutive month of increases, but were down half a percent from August on a seasonally-adjusted basis. The latest small move in sales on both a month-over-month and year-over-year basis suggests that there’s no big surge in homebuyer demand to thank or blame for the strengthening home price gains. Rather, it was a modest increase in demand in conjunction with a large supply decline compared to a year ago that caused price growth to accelerate. Note: August sales were revised downward from last month’s market report. 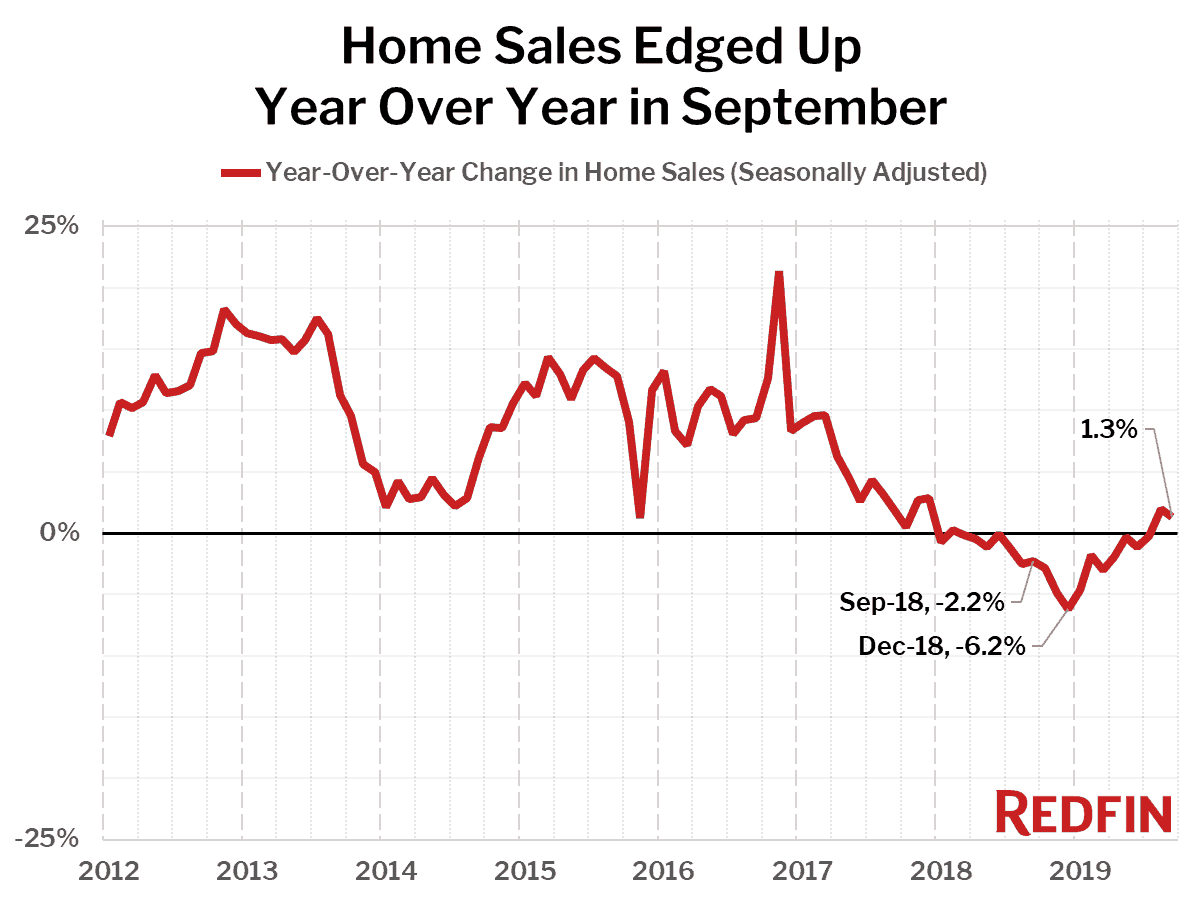 The supply of homes for sale fell 7.7 percent year over year, the biggest decline since January 2018 and the third month in a row of declines. Just 18 of the 85 largest metros tracked by Redfin posted a year-over-year increase in inventory. A continued shortage of new listings while sales hold steady is behind this decline. Seasonally-adjusted new listings were virtually flat from August, but fell 3.6 percent from a year earlier in September, the fourth consecutive month of declines. 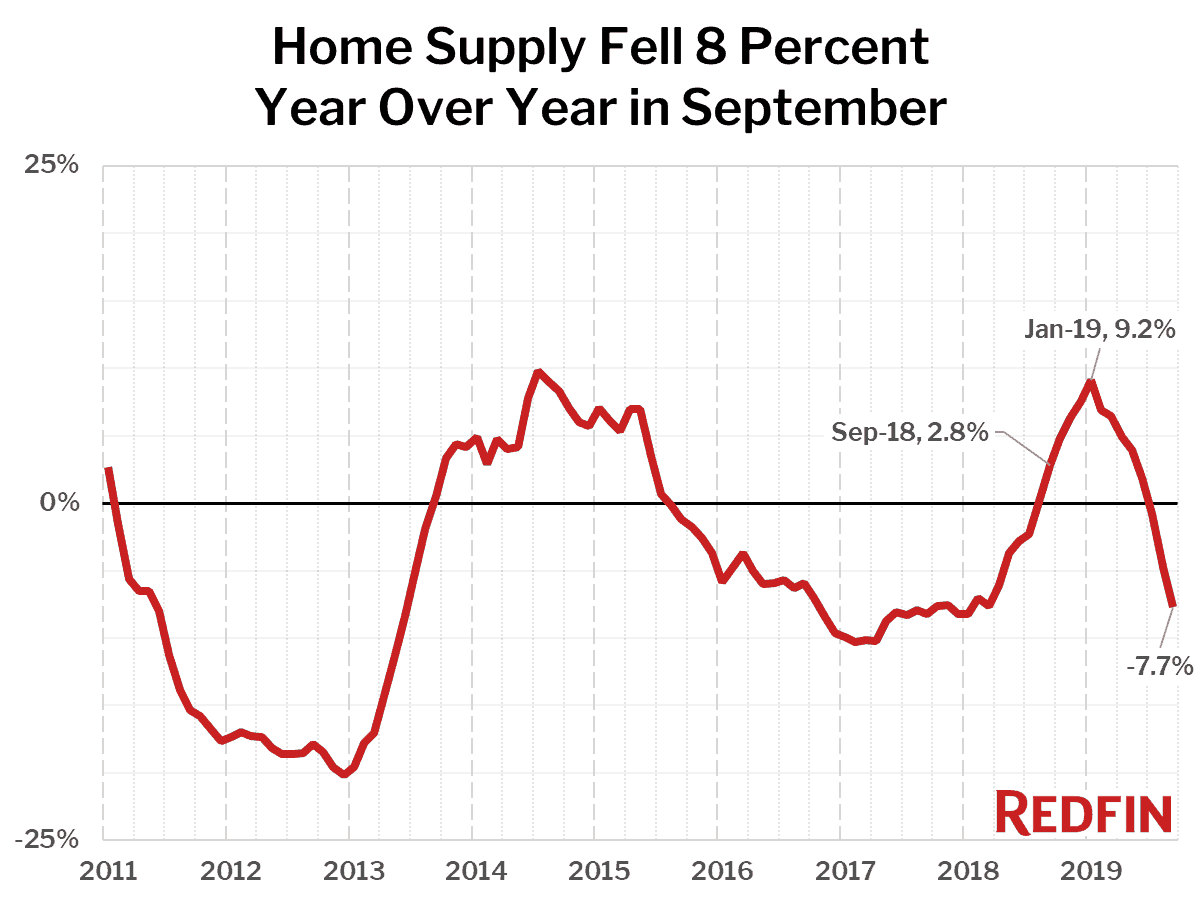 Although inventory is way down and price increases are gaining steam, homes are taking longer to sell and are less likely to sell for more than list price compared to a year ago when the market was beginning to cool. 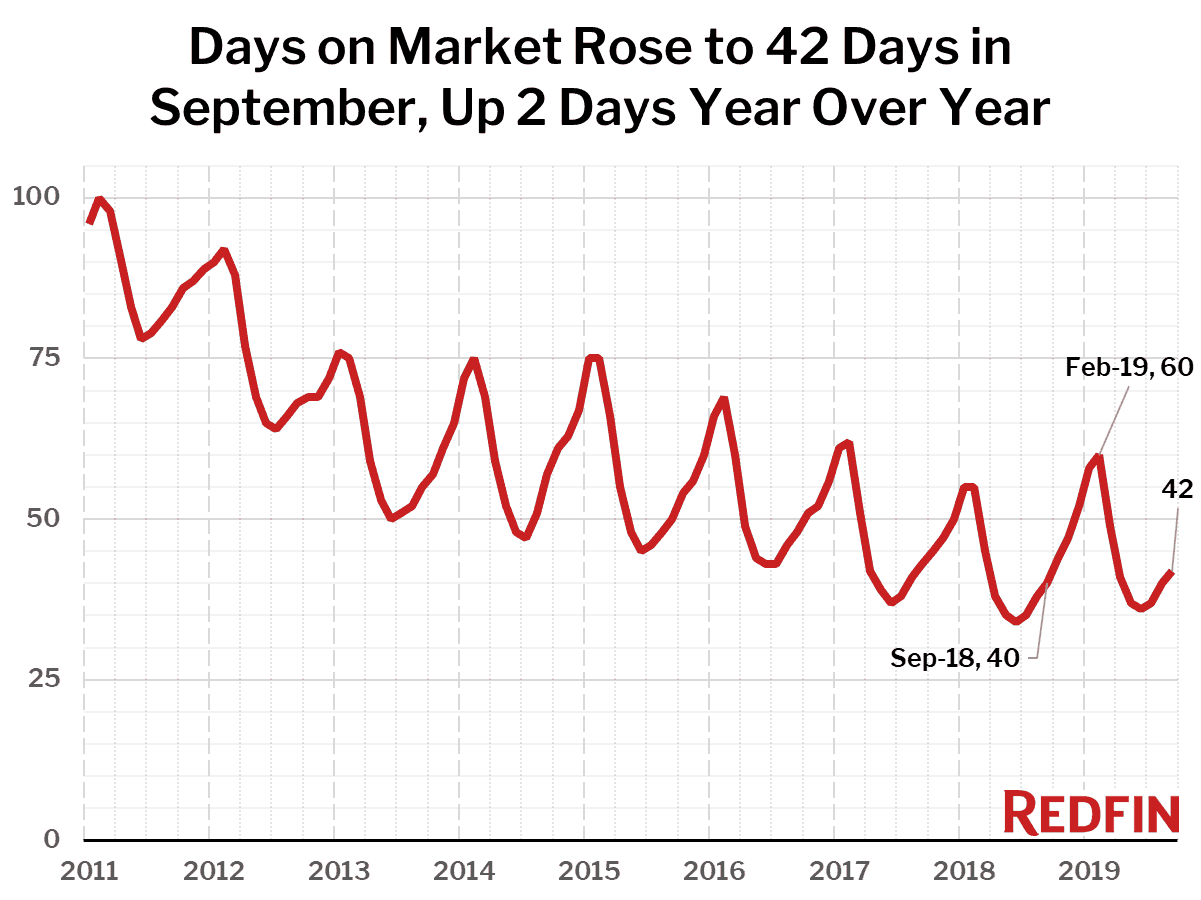 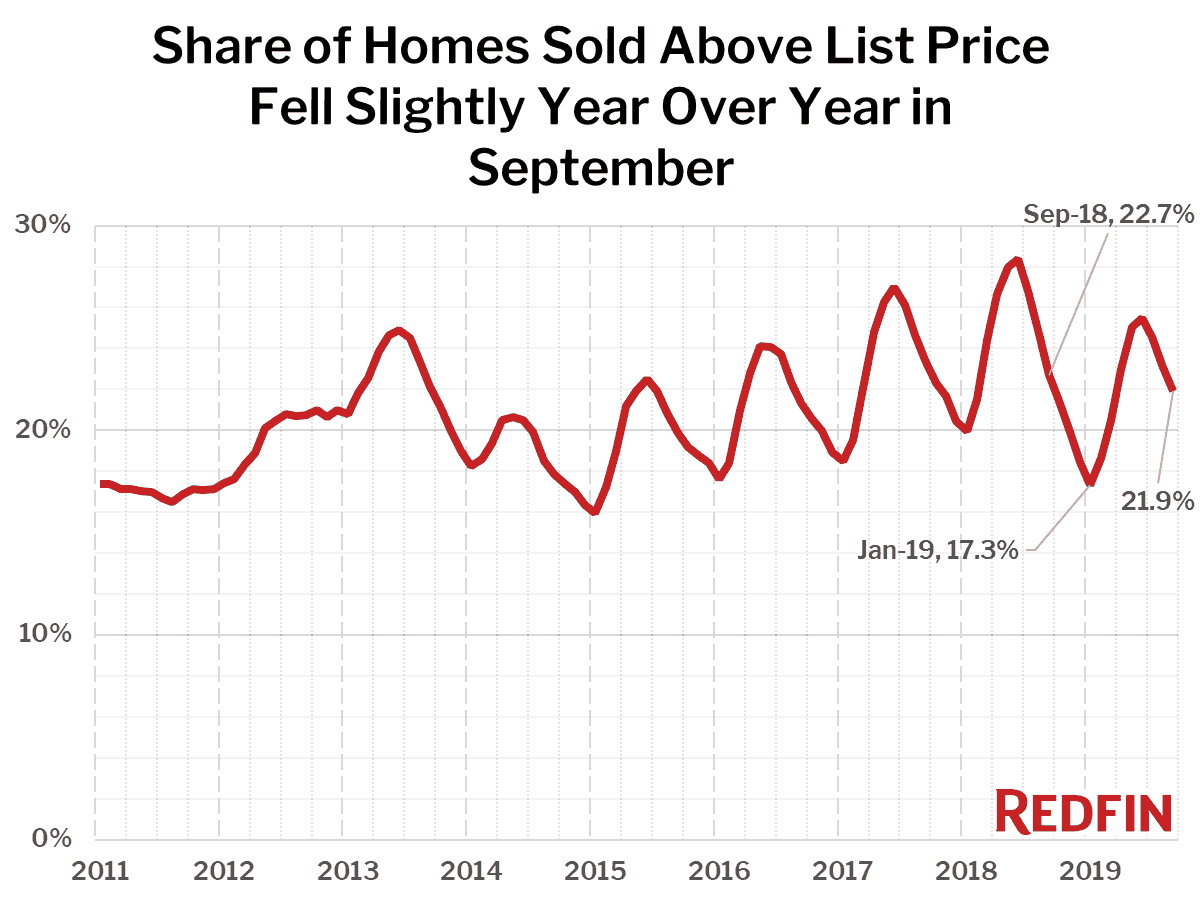