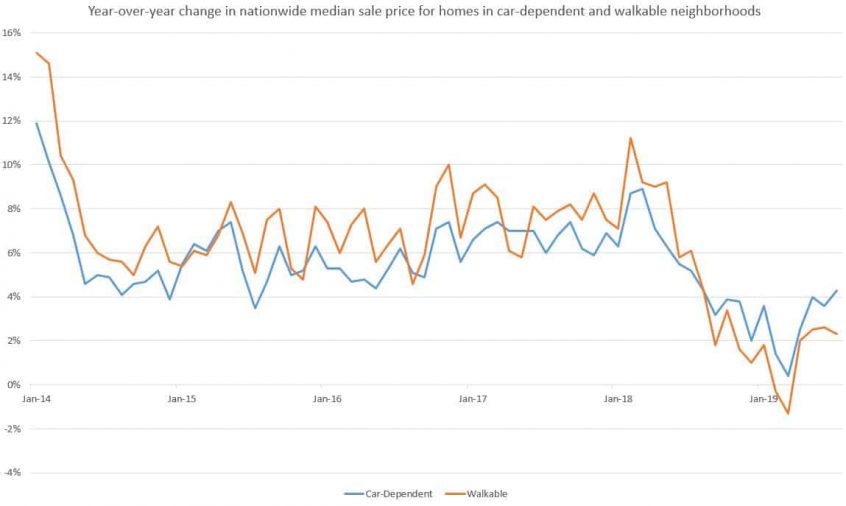 Market trends suggest that many homebuyers are prioritizing affordability above walkability.

Home-sale prices in walkable neighborhoods across the country increased 2.3 percent year over year to a median $343,900 in July, compared to 4.3 percent annual growth to a median $312,100 for homes in car-dependent areas.

That’s according to data from Walk Score®, a Redfin company that rates the walkability of neighborhoods, cities and addresses . A place is deemed “walkable” if some or most errands can be accomplished on foot, while “car dependent” means most errands require a car.

“In the second half of 2018, homes in the hottest coastal markets became so expensive that most homebuyers became priced out of walkable neighborhoods, where homes tend to sell at a premium ,” said Redfin chief economist Daryl Fairweather. “It’s not that people value walkability any less than they used to. Many homebuyers are simply relegated by their budgets to live in car-dependent areas, which have since seen demand and home prices grow at a faster rate. The trend also has implications for society, with families becoming further segregated by class and race, as well as for the environment, as more demand in car-dependent areas means more carbon emissions . Growing cities can combat these issues by adopting policies that encourage building more dense, affordable housing in walkable areas.” 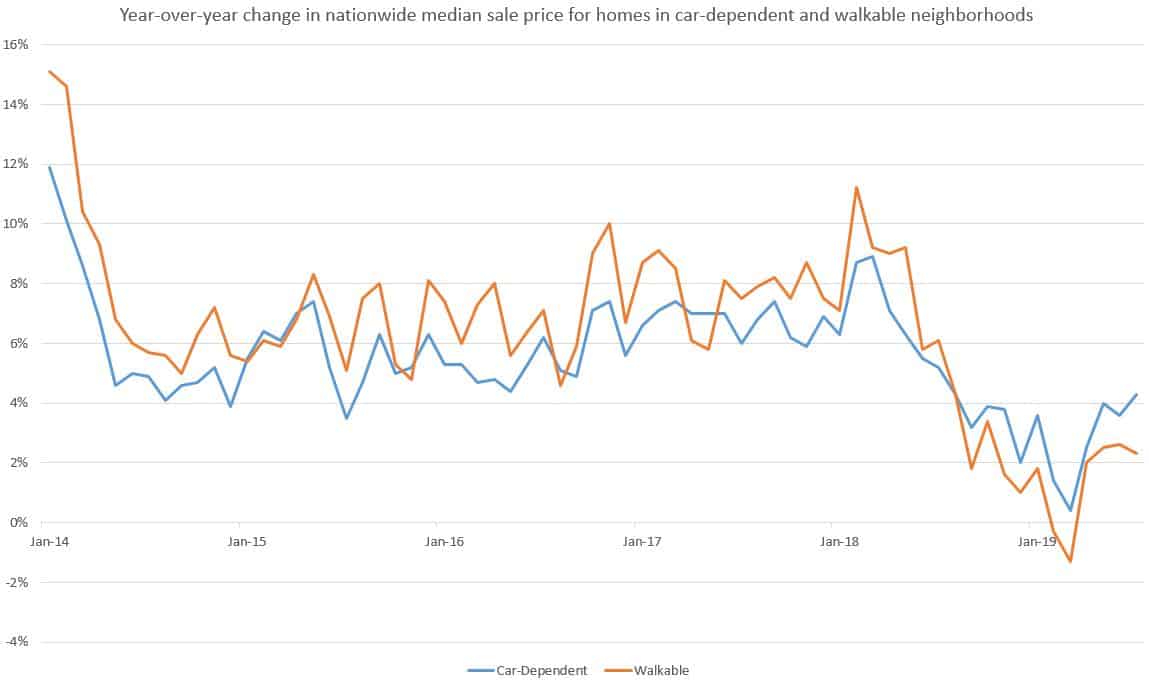 San Jose (-7.2%) and Seattle (-6.5%) led the way for price drops in walkable areas in July. Though that mirrors the continued softening trends in the San Jose housing market , prices for homes in car-dependent neighborhoods rose 1.9 percent. In Seattle, homes in car-dependent areas posted a 1.5 percent year-over-year price increase. 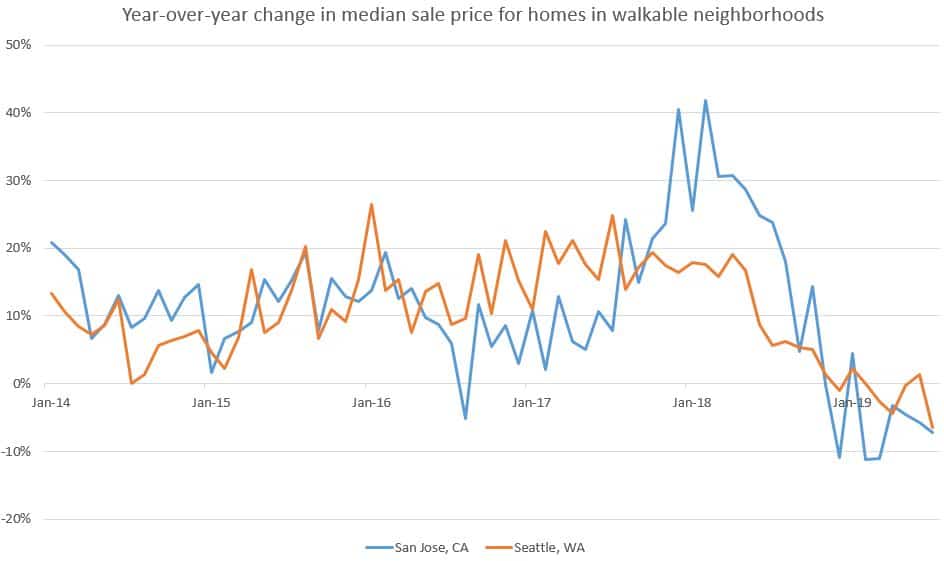 In all but four metros in the U.S., home prices in car-dependent neighborhoods increased year over year in July. Philadelphia , with a 17.9 percent annual increase, led the pack, followed by Cleveland (10.6%), Fort Lauderdale (9.1%), Pittsburgh (8.5%) and Miami (8%). In all those places except Pittsburgh, home prices also rose in walkable neighborhoods.

Walkable parts of Columbus, Kansas City and Detroit had the biggest price increases in walkable neighborhoods

Twenty metros buck the national trend, with median home-sale prices increasing more for homes in walkable areas than car-dependent areas. That’s particularly true in the Midwest, where homes tend to be less expensive than they are on the coasts and buyers may be able to afford homes in more central areas.

For a look at Walk Score® data for most major U.S. metros, including the metrics included in this report, check out the dashboard below. 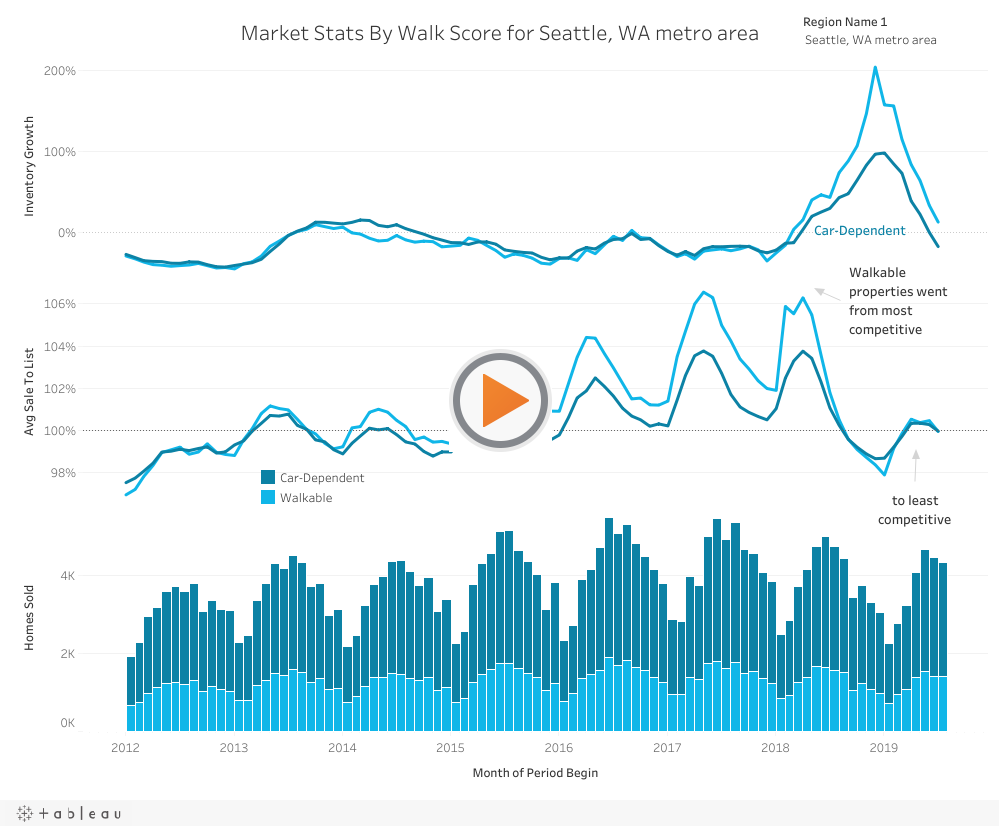 Only metros where at least 1,000 homes in walkable neighborhoods sold in July were included in this report.