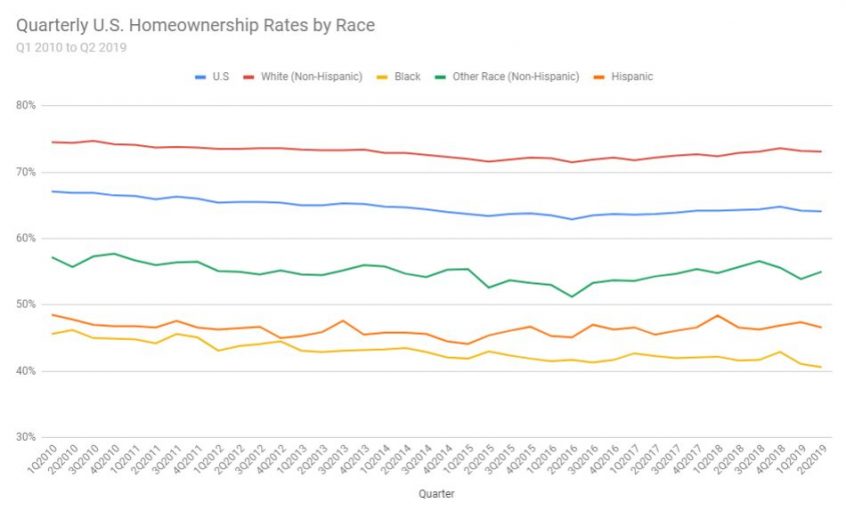 Since the end of the Great Recession, the homeownership rate for black Americans has fallen 5 percentage points to 40.6%. And while majority-black neighborhoods have seen an average of $121,000 in home-equity gains, it’s $191,000 for majority-white neighborhoods.

And though those who do own homes across majority- black, Hispanic and white neighborhoods have built wealth through home equity gains as home prices rose, the average homeowner in a majority-black neighborhood is still left with just over half as much equity as the average homeowner in a majority-white neighborhood. In part as a result of the inequality in homeownership and home-equity gains, black Americans have seen their median net worth decline in the past decade while for white Americans it rose by double digits.

“With higher unemployment rates and less wealth to begin with, black Americans were less able to buy homes even when prices were at their lowest point, meaning many missed out on opportunities to build wealth and put down roots in their communities through homeownership,” said Redfin chief economist Daryl Fairweather . “The growing racial homeownership gap has widened the wealth gap, as home equity remains one of the most significant wealth-building tools. And now, with higher home prices and tighter lending standards than before the housing crash of 2008, it’s more difficult than ever for minorities to break into the housing market. That’s likely to contribute to growing economic inequality in the U.S.”

We’ve compiled data on homeownership rates, home equity, net worth and unemployment by race below.

For the section on home equity gains by race, we looked at county sale records for homes purchased at anytime during 2012. After cleaning the data, we had a sample of roughly 962,000 sales. Assuming those homeowners are still living in the same house and that they all took out the prevailing 30-year fixed mortgage rate at the time of purchase, we were able to calculate the outstanding loan balance in August 2018 using the total original value of loans (first and second), the 30-year fixed monthly average mortgage rate from Freddie Mac in the month of sale and the total number of monthly payments made thus far. We assumed that none of the homeowners paid down their mortgage and that none borrowed against their home equity. The August 2018 Redfin Estimate was used as a proxy for the current market value of these homes. Home equity in 2018 is then obtained by subtracting the outstanding mortgage balance from the current market value of the home. Home equity in 2012 is simply the difference between the purchase value of the home and the original loan balance. We classified a zip code as black, Hispanic/Latino or white if more than 50 percent of the households were black, Hispanic/Latino or white over the five-year period from 2012 through 2016, according to household race data from the 5-year American Community Survey . Because the sale records are linked to zip codes, we are able to track home equity changes in black, Hispanic/Latino and white zip codes, as defined above. Of the roughly 2,300 zip codes, 74 percent were majority white, 8 percent were majority black and 8 percent were majority Hispanic/Latino. In 10 percent of the zip codes, none of those races is the majority.

Throughout the report, the term “black” refers to “black or African American.” The term “white” refers to “White, not Hispanic or Latino.”

The post Race Gaps in Homeownership Rates and Home Equity Have Widened During the Decade-Long Economic Expansion appeared first on Redfin Blog .