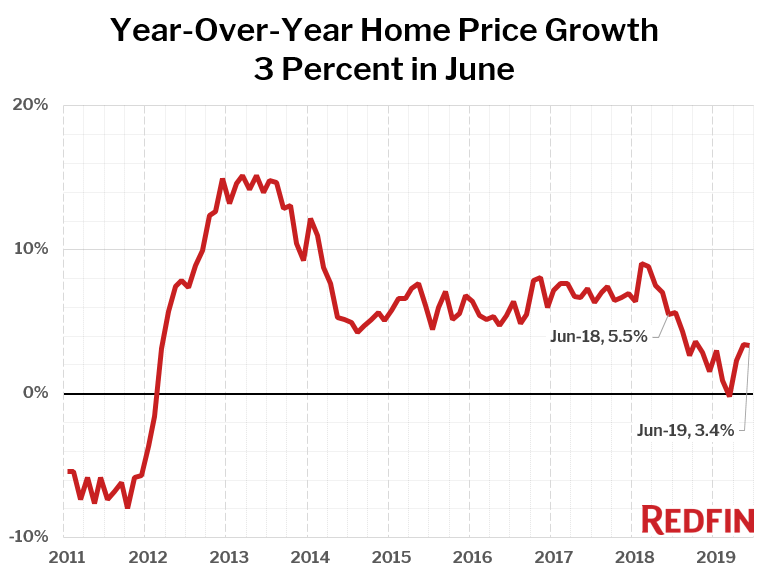 U.S. home-sale prices rose for the third consecutive month in June, growing 3.4 percent year over year to a median of $321,200 across the metros Redfin tracks. The growth rate of home prices was on par with the May rate and was down from a 5.5 percent year-over-year gain in June 2018.

“As national home price growth stabilizes, we’re continuing to see supply and demand dynamics play out differently in affordable inland markets than in expensive coastal markets,” said Redfin chief economist Daryl Fairweather . “In places like Philadelphia and Cleveland , where home prices are growing by double digits and buyers are rate- and price-sensitive, falling mortgage interest rates make buying a home this summer increasingly attractive. But without a commensurate increase in the number of homes for sale, some of the most affordable markets are driving nationwide home prices up. Meanwhile, expensive markets like the Bay Area and Seattle are still feeling a chill with falling prices and many more homes for sale than there were a year ago. Unlike their inland counterparts, buyers in these once-hot West Coast markets are less likely to feel the urgency to buy while rates are low and before prices rise more. As long as mortgage rates and inventory are low, we’ll see more buyers competing for homes and driving up prices in places where they are still relatively affordable. And without more homes to buy, particularly at affordable price points, sales will continue to lag.”

Home sales fell 8.0 percent in June compared to a year earlier. This was a sharp reversal from May, when home sales increased 2.2 percent from a year before. The decline was broad—80 of the 85 metros tracked by Redfin saw year-over-year home sales fall in June.

With prices growing, flat inventory, and homes selling as fast as ever, we were surprised to see that the number of sales fell as much as it did in June. The 8 percent drop was the fourth largest decline in eight years. When our economists investigated they found that after adjusting for the number of weekdays in a month (Fridays in particular, since that is a common day for home closings), the sales were down just 3.5 percent year over year. 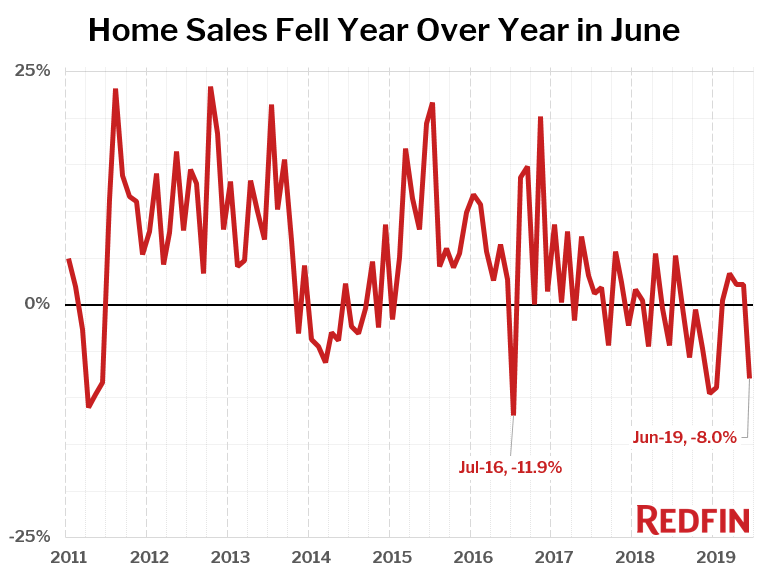 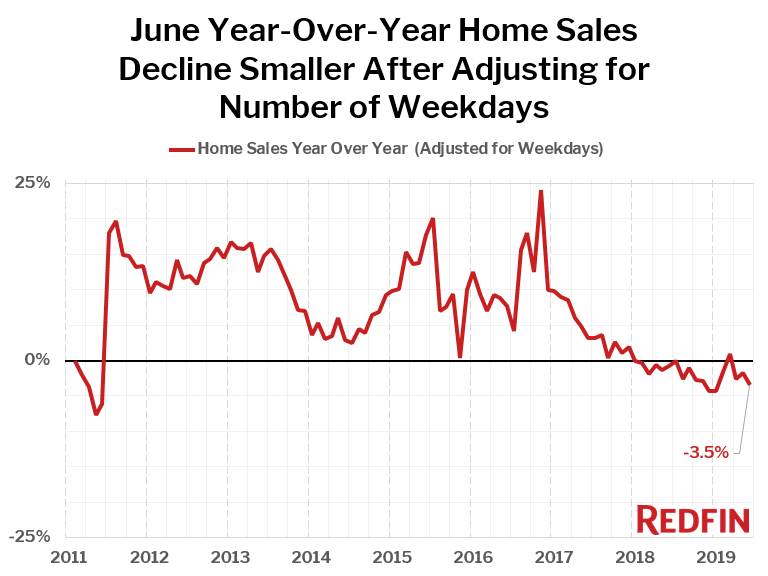 The supply of homes for sale grew 0.5 percent year over year, the smallest increase in the 10 months inventory has been rising. This is slightly higher than the data we posted for the third week of June earlier this month, suggesting that new listings gained strength in the last week of June. The inventory situation was mixed across the country, with 48 metros seeing a decline and 37 seeing an increase in the number of homes for sale compared to a year earlier.

Even though sales were down from a year ago, the speed at which homes went off the market matched the all-time record set last June. Homes that sold last month went under contract after a median 35 days on market, unchanged from last year. The fastest markets in the nation were Tacoma, WA (7 days), Grand Rapids, MI (7), and Boston, MA (9).

On the other end of the spectrum, many of the markets that were the hottest last year saw an increase in days on market for June compared to a year ago: 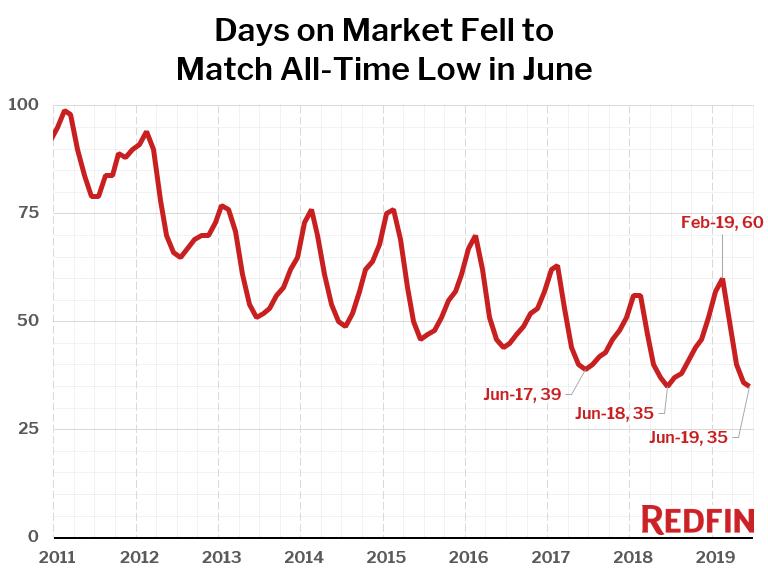 The average sale-to-list ratio of homes sold hit a new all-time high in June at 98.8% nationally. While the national sale-to-list price ratio masks regional variation, as the ratio approaches or exceeds 100%, it generally indicates that buyers have less leverage, or have had less success, negotiating prices down.

That said, there are still other measures that indicate the market is a little cooler than a year ago. The share of homes sold above list price was 24.9 percent in June, down from 28.4 percent a year earlier. Also, 26.5 percent of homes listed for sale had a price drop in June, up from 25.1 percent in June 2018.

The post Home Prices up 3.4 Percent in June as Supply Flattens appeared first on Redfin Real-Time .