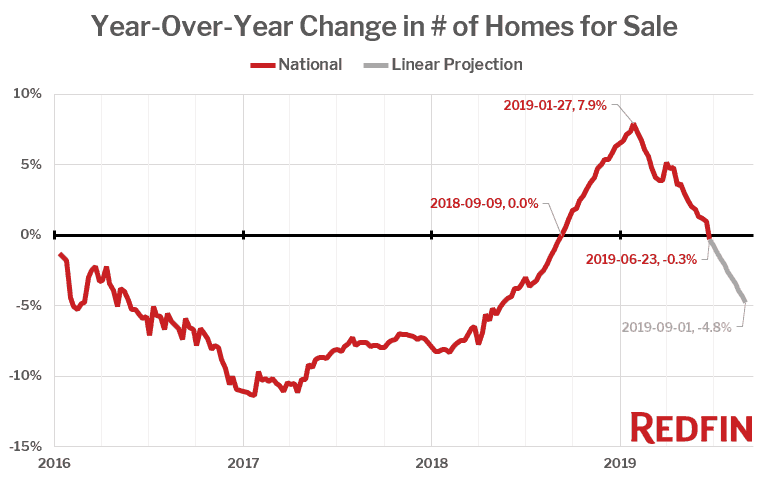 The number of homes for sale nationally fell 0.3 percent year over year in late June—the first annual decline since inventory started climbing in September. This marks the end of a brief respite for buyers in this years-old seller’s market. If supply growth continues falling at the rate it has been since April, by September the number of homes for sale will be down from a year earlier by more than 4 percent.

This is according to data on the number of homes for sale as of June 23 across 46 major markets Redfin tracks.

However, the national numbers mask a huge amount of regional variation under the surface. As of late June, 32 of the 46 largest U.S. metro areas had fewer homes for sale compared to a year earlier. In fact, in some of the country’s most affordable housing markets, the inventory crunch never subsided. For example, Oklahoma City, where the median price of homes sold in May was just $184,900, had 15.3 percent fewer homes for sale in late June compared to a year earlier and has not seen year-over-year growth since going negative in late 2016. Other affordable metro areas like Memphis and Pittsburgh have similar stories.

With mortgage interest rates having dropped back to below 4 percent, demand is picking back up, which is likely to lead to renewed inventory shortages later this year, even in the more expensive markets.

“Lower interest rates are bringing buyers back, but without enough homes for sale to meet demand, we expect to see more bidding wars, which will push prices up this summer,” said Redfin chief economist Daryl Fairweather. “We expect small, inland markets where a typical home is still affordable for a middle-class family to heat up the most. Those markets, like Knoxville and Akron, are already experiencing double-digit annual price growth, and there is a lot of room for prices to continue to grow. Expensive metros like San Jose and Seattle may see moderate price growth this summer, but for the most part those markets have already peaked.”

In San Francisco, where a recent series of high-value tech IPOs has already led to a surge in bidding wars, the number of homes for sale was still up 12.0 percent from a year ago—far less than San Jose or Seattle. Supply growth is down from a high of over 60 percent in late December, indicating that San Francisco is transitioning from a sharp cooldown back to a hot market.

The post Supply of Homes for Sale Down 0.3 Percent in June, First Annual Decline in 10 Months appeared first on Redfin Real-Time .