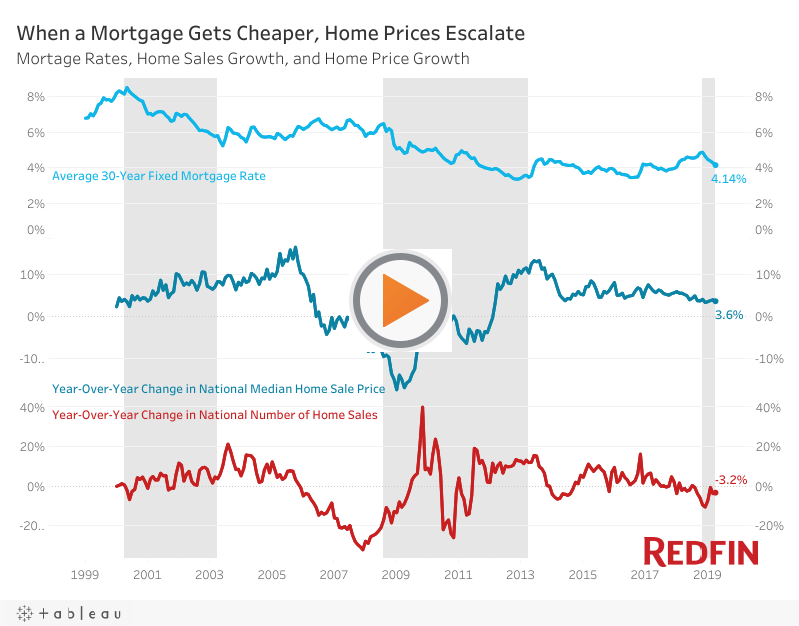 A weakened stock market and looming economic fallout from trade wars have led many to expect that the Fed will lower interest rates this year . If the rate cuts come, and translate to a decline in mortgage rates, homebuying will become marginally more affordable, which is likely to lure more buyers to the market, increasing competition for homes for sale, and driving prices and sales up.

Over the past few decades, whenever mortgage rates have been in a period of extended decline, the housing market generally has reacted with increases in both price growth and sales growth, driven by increased homebuyer demand.

Consider the period between 2000 and 2003, when mortgage rates fell from more than 8 percent down to 5 percent. Annual home price gains over that time increased from 2 percent to more than 10 percent, and year-over-year changes in home sales went from zero to over 10 percent.

Since late 2018, mortgage rates have fallen three quarters of a point, from 4.87 percent in November to an average of just 4.14 percent in April. During that same period home sales have gone from 10 percent year-over-year declines to, just a 3.2 percent decline in April, and home prices have steadied out at 3-4 percent annual increases.

“I expect the Fed to cut interest rates this summer to bolster the economy in the face of trade tensions,” said Redfin chief economist Daryl Fairweather . “That could cause 30-year fixed mortgage interest rates to fall below 3.5 percent by the end of the year, which is lower than they’ve been since October 2016. That will encourage even more prospective buyers who’ve been waiting on the sidelines to put their hat in the ring for homes that will slide into the realm of affordability as rates decline. While lower mortgage rates will inspire some people to list their homes for sale, so they can move and so they can capitalize on the increased demand, it’s unlikely to create enough new inventory to meet demand. As a result, the healthy around-3 percent rate of home price growth we’ve been enjoying lately is likely to be short-lived. We could see price growth surge to a rate of more than 8 percent, on par with the growth we were seeing in late-2016. Sales could also rebound, with growth reaching double-digits compared with last year, but the growth would be temporary. In the long run, without a substantial increase in the supply of housing, we’ll see sales slow back down, but home prices will continue to grow at a stronger rate than we’ve grown accustomed to this year.”

Of course, the economy is extremely complex, and there are many more factors that affect the housing market beyond just mortgage rates. It’s impossible to know definitively that a change in a single input like mortgage rates will have a predictable effect on the overall housing market. A drop in mortgage rates might make homebuying more accessible, but if the economy weakens at the same time, the market might not see much of a boost.

The post Here’s What Homebuyers and Sellers Can Expect if the Fed Lowers Rates appeared first on Redfin Real-Time .