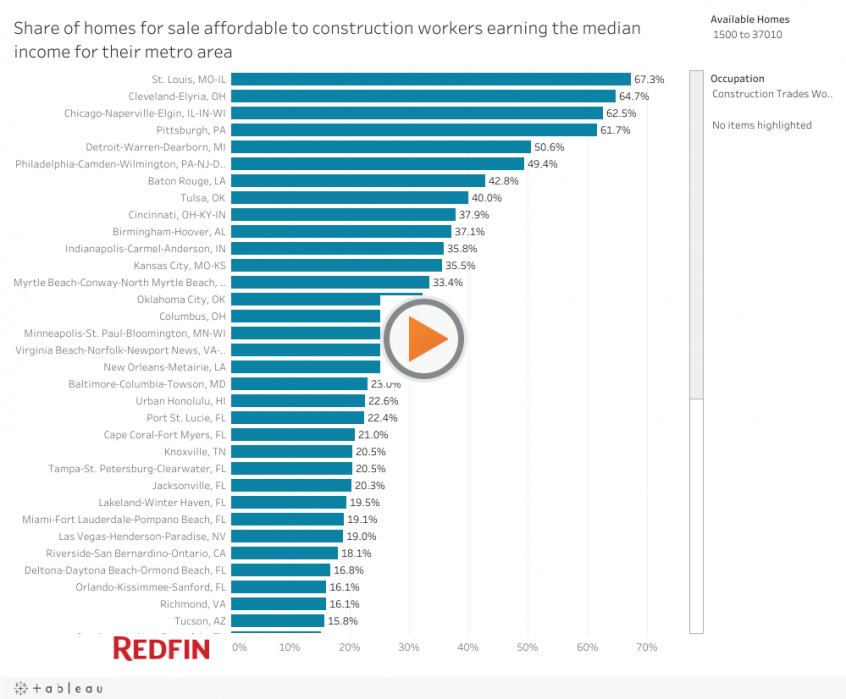 But the people who build homes can’t afford to buy them in the California metros that need new housing the most.

St. Louis is the most affordable place for a construction worker to buy a home, with 67.3 percent of homes for sale affordable on the median personal income for construction workers in the area, the highest share of any U.S. metro. It’s followed by two Midwestern neighbors, Cleveland (64.7%) and Chicago (62.5%). Those metros are also relatively affordable for the population as a whole: In all three places, more than half of homes for sale are affordable on the area’s median household incomes.

Partly due to a lack of inventory, median sale prices in many parts of the state are sky high, clocking in at more than $1 million in San Jose and San Francisco. The catch-22 is that the people who build homes can’t afford to live where housing supply is needed most.

For a more complete picture of housing affordability for construction workers throughout California and the U.S., the Redfin dashboard below ranks metro areas from most to least affordable for people in the occupation: 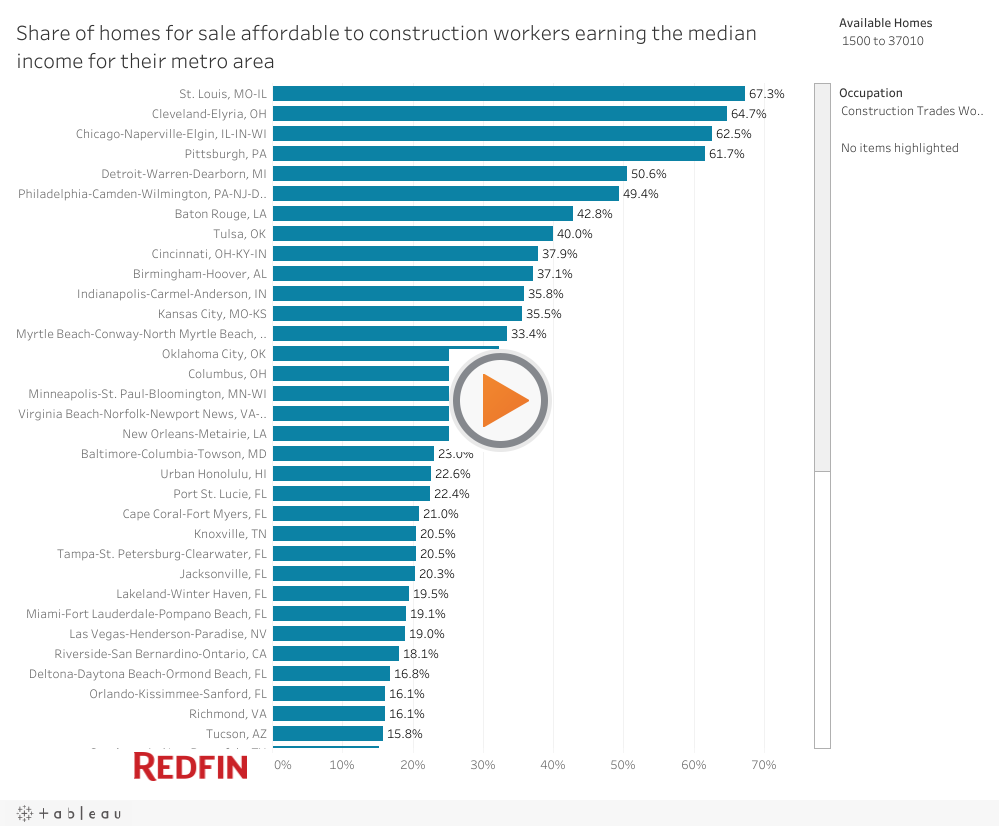 The dashboard above is based on homes currently for sale in metro areas with more than 1,500 active listings, with the share of homes affordable to construction workers based on the median income for the profession in each area.

New construction is a key ingredient in the affordability of housing markets. New homes contribute to overall housing supply, and sufficient supply helps prevent home prices from rising too high. But nationwide, growth in new listings of new homes has steadily declined for the last three years. And while the U.S. construction industry experienced strong employment growth in April, adding more jobs than any industry except business services, residential construction employment is still below pre-recession levels . Demand for homebuilding services greatly outweighs supply, according to Robert Dietz, chief economist at the National Association of Home Builders .

“One of the challenges in the real estate market right now is that there’s not enough inventory, and part of that is due to a lack of home construction in the last few years. A lot of factors limit the production of new homes, but labor is the top supply-side constraint,” Dietz said. “The difficulty of finding and hiring construction workers, particularly in certain areas, is a significant reason why new homes aren’t being built fast enough.”

Take the Bay Area as an example of the housing affordability problems associated with a lack of supply. Although inventory has been recovering in San Jose and San Francisco in recent months, those markets are continuing to feel the effects of 15 consecutive months of double-digit supply declines from mid-2017 through mid-2018. The lack of inventory drove prices from a median of $820,000 in the beginning of 2017 to more than $1.1 million last month in San Jose, and $1 million to $1.5 million over the same time period in San Francisco.

“It might seem like the solution to the housing shortage is straightforward—just build more homes—but in many California metros construction workers aren’t paid enough to cover their own housing costs, which makes attracting construction workers to build those homes quite difficult,” said Redfin chief economist Daryl Fairweather . “To solve the housing crisis, the government needs to step up and subsidize new construction. Some voters might find it distasteful to give wealthy developers subsidies, but those subsidies could come with strings attached like higher pay for working-class construction workers.”

The post St. Louis, Chicago and Cleveland Are the Most Affordable Areas for Construction Workers to Buy Homes appeared first on Redfin Real-Time .