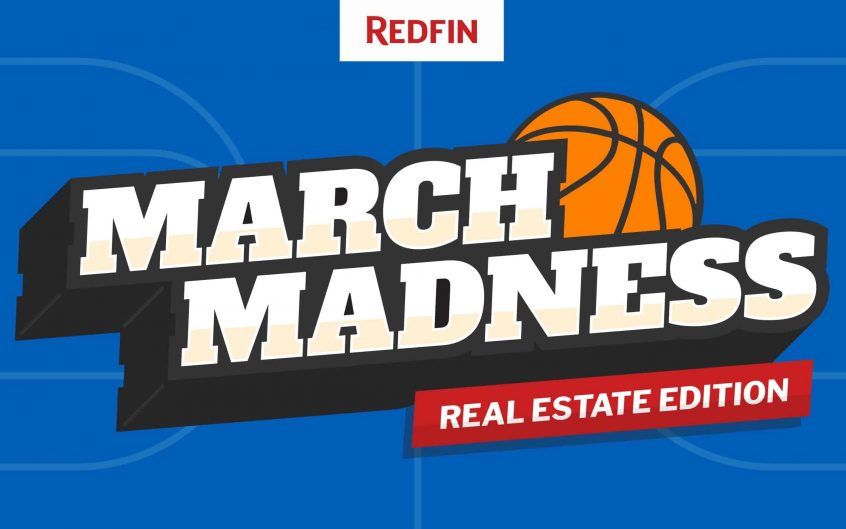 One of the most exciting events in all of sports, March Madness 2019, just began. For those of you who may not know, March Madness—also known as the NCAA Tournament—is a single elimination tournament comprised of 68 men’s Division 1 college basketball teams and takes place between March 19 and April 8.

For this year’s March Madness, Redfin has pitted the real estate markets of twelve teams against one another to see how the home town of these rivals stacks up. So throw on your alumni gear, fill out your bracket, and place your bets, it’s time for March Madness: Real Estate Edition.

With a Compete Score of 88, Maryland’s home of College Park comes out on top in Round 1, defeating the housing markets of both VCU’s Richmond and Northeastern’s Boston , which both tied for second. While the runner-ups have very respectable scores, it wasn’t enough to beat Bruno Fernando and the Terps.

Compete Score is Redfin’s proprietary metric that helps homebuyers understand how challenging it is to get a home under contract in a given market. The higher the score, the more likely a homebuyer is to encounter a bidding war and to have to use strategies like waiving the inspection or financing contingency in order to get their offer accepted.

In Round 2, we see two Huskies battle it out, leaving the Washington Huskies and the Seattle market to claim their first victory over Northeastern in Boston . Boston may have a high average sale price of $610,000 but that’s nothing compared to Seattle, host to one of the highest home sale prices in the country.

Round 3 – Average Price per Square Foot

Immediately avenging themselves, the Boston -based Northeastern Huskies defeats the Washington Huskies’ Seattle market in a decisive $62 margin of victory. In doing so, they also manage to sail over the tightly contested housing markets of Maryland and the Ignas Brazdeikis-led Michigan, who themselves were neck and neck at $213 and $211 per square foot, respectively.

Round 4 – Shortest Average Time on Market

With the average home spending just 25 days on the market, Buffalo has claimed its first victory, tying with both housing markets of Northeastern’s Boston and VCU’s Richmond , with all three claiming a narrow victory over the Maryland Terrapins.

Considered one of the most walkable cities in the nation, Northeastern’s Boston easily walks away with the win, defeating Washington for the second time. Boston can thank their victory primarily to its lack of hills and the very walkable North End and Bay Village neighborhoods, both of which boast Walk Scores of 98.

The Minnesota Golden Gophers come away with their first win thanks to their hometown of Minneapolis being one of the most bikeable cities in the country. Easily edging out Washington, Minneapolis can also boast the second largest number of bike commuters in the USA (right behind Portland, OR).

Once again defeating Washington’ Seattle market , Northeastern’s housing market of Boston has managed to secure another win in what has become a battle of the Huskies. Measured by the amount of public transportation available in an area and the distance to which the average commuter can travel in 30 minutes, Boston owes their score to an impressive 113 bus lines, five light rails, three subways, and two ferries!

In an impressive display of dominance, Northeastern’s home city of Boston, MA has won four of the seven housing market categories. While this result would be the upset of the century should it occur in this year’s March Madness, Boston’s strong seller’s market is one of the best in the country and, clearly, amongst the NCAA Tournament competitors as well.

Criteria for selecting the twelve teams were based on:

In keeping with the spirit of competition, these categories were chosen as a means of determining which school is located in the most competitive seller’s market. In all but one category (shortest average time on market), the highest score wins the round.